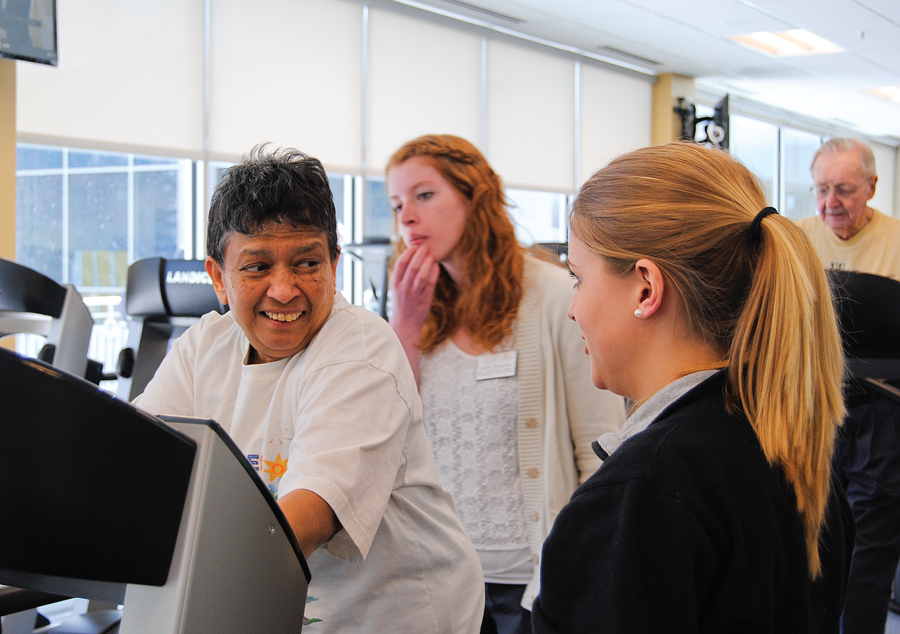 Editor’s Note: This article contains spoilers for the first episode of Season 3 of “House of Cards.” Read with caution.

Once they found out that Doug Stamper was alive after his head was bashed in, careful viewers of the newest season of “House of Cards” may have noticed that some of his rehabilitation scenes were filmed close to home – at the Institute for Well-Being, located off of the main campus near the traffic circle.

Director of Media Relations Gay Pinder showed a scouting crew a few areas on campus after she got the phone call saying that there was some interest in filming at Towson.

“I took them over to the IWB and they really liked what they saw over there,” she said.

The crew filmed in the Wellness Center, a smaller, group activity room and a conference room that was converted into a doctor’s office.

Carol Gebhardt, the health administration program manager, was part of the group that worked with the crew while they were filming.

“It was pretty hush-hush because it was Stamper,” she said.

Money went to the Towson University Foundation for each day of filming and each day of set-up.

Not only did Towson serve as the backdrop for some of the season, but a small role in props and storyline.

Originally in the show, Stamper was going to be walking with a cane. Before the consultant physical therapist that “House of Cards” had hired made it to the set, however, staff from the IWB stepped in.

“When they told us what they were initially going to do, we were like, ‘That’s not real physical therapy,’” Sharon Glennen, director of the IWB, said. The crew was told that someone with the level of head injury that Stamper suffered would be using a walker, not a cane.

“They didn’t have one on set, so we ran up here to our closet and I joke because there’s a scene in episode one where they do a close-up of Michael Kelly’s hands holding the walker,” Glennen said. “It’s our famous walker.”

The reveal of Stamper’s head injury also ties in with a new program at Towson — the Wellness in Stroke and Head Injury (WISH) program, which launched Fall 2014. The group meets on Tuesdays and Fridays.

According to Lynne Murphy, a clinical associate professor of occupational therapy, all of the clients in WISH right now are individuals who have had a stroke.

WISH always has some sort of group socialization at the beginning of the day and then some individual and group exercise in the Wellness Center. On Fridays, the group works on daily living and community skills – like cooking.

“I think it’s really unique when we have that group where everyone can get together and work on all aspects of wellness,” Iona Johnson, a clinical associate professor of speech pathology, said.

In a brightly lit, window-covered room where “House of Cards” filmed a physical therapy scene, exercise science major Christy Pino led four WISH clients in a group exercise focused on their balance. Music played through a speaker over the sound of the students and clients laughing as they practiced different stretches.

“The participants all seems really into it today,” Pino said. “You get a good feeling out of it. Now that everyone’s into it and they have a positive attitude about it, it just makes you happy because you’re a part of that.”

WISH is not the only program that runs out of the relatively-new IWB. There is the Wellness Center, where faculty, members of the community and other eligible persons can exercise and receive health risk and fitness assessments to have design an exercise program, in addition to the Hearing and Balance, Occupational Therapy and Speech & Language centers and the Hussman Center for Adults with Autism.

Glennen said that some future participants in WISH might have symptoms that are similar to the ones Michael Kelly portrayed as Stamper.

“The key difference is that a stroke tends to be very localized,” she said.

Stroke victims, she said, tend to only have neurological issues in the spot where the stroke occurred, while people who suffer head injuries — like Stamper did in the show — see more diffuse or global effects because the entire head is involved and tend to have difficulty with executive function.

The characteristics of Stamper’s injury — some difficulty with memory and motor function, for example — were accurate except for one thing, according to Glennen.

“What I saw was the chronology of his recovery was totally unrealistic,” she said. Things were sped up or out of order, Glennen said.

While filming was happening, Towson staff at the IWB was allowed to stand behind monitors that were connected to cameras and watch the scenes as they played out. Glennen and others also got to meet the actor and spend time with the crew.

Gebhardt and Glennen are both fans of the show, and both said that they enjoyed the experience of getting to watch some scenes unfold during filming – and watching all of the newest episodes.

“I think Doug Stamper was the strongest character, development-wise, in Season 3 because of his recovery story,” Gebhardt said.