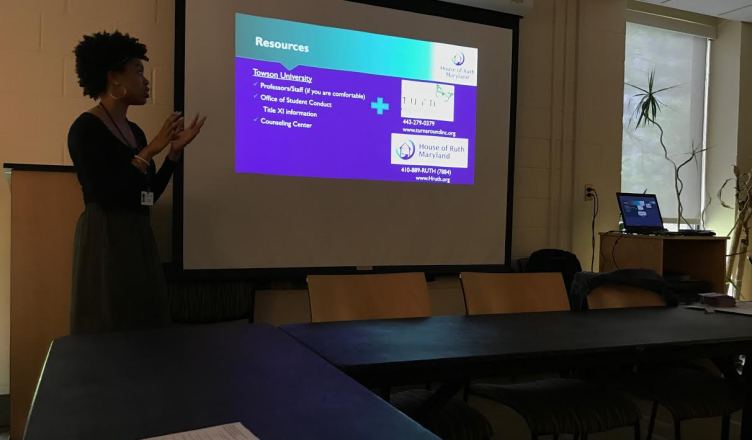 Approximately 43 percent of dating college women report experiencing abusive behaviors from their partner. Over 13 percent of women in college have been stalked. Statistics vary, but according to some research, as many as one in four women are sexually assaulted during their undergraduate tenures.

Of course, it’s hard to know the exact number of women who have been abused or sexually assaulted in college, because many cases go unreported. These and other staggering statistics were presented on Wednesday in the Center for Student Diversity’s Lunch n’ Learn with Brittany Taylor, a community organizer from Baltimore’s intimate partner violence shelter House of Ruth.

Taylor’s presentation educated the attending students and faculty members on what intimate partner violence, or IPV, is: A pattern of coercively controlling behavior used by a current or previous partner to gain or maintain power and control over the other partner. House of Ruth differentiates IPV from the term “domestic violence,” because not all partners live together — especially when the partners in question are college students.

While IPV knows no boundaries in terms of age, race, class or sexual orientation, statistics show that college-aged women are especially at risk.

“Students are in the vulnerability stage,” Taylor said. “We have students who, psychology-wise, their prefrontal cortex is still in development, so decision-making [is hindered].”

She handed out slips of paper to audience members that gave examples of varying types of intimate partner violence. Audience members took turns reading the scenarios aloud, and the rest of the crowd tried to pinpoint the type of IPV each scenario illustrated.

In one scenario, based on a real situation that Taylor dealt with during her time counseling at House of Ruth, a boyfriend destroyed his girlfriend’s makeup because he didn’t like her wearing it to class. Audience members volunteered different types of IPV this might be — economic abuse, emotional abuse, male privilege — all of which were true.

“It’s different for everyone,” Taylor said, and different kinds of abuse can fall under different categories.

However, no matter what category the abuse falls under, all types of intimate partner violence have one thing in common: the utilization of power and control.

For male and female college students who might be experiencing IPV, Taylor recommended a variety of on- and off-campus resources.

“If you’re looking within the university, definitely take a look at the Office of Student Conduct. It has Title IX information. If you feel comfortable talking to a professor or staff, you can, and you also have the counseling center,” Taylor said. “Outside of the university, you also have two providers. One is TurnAround, they deal with sex trafficking, and that’s what at House of Ruth we don’t have yet. You also have us, as far as the House of Ruth Maryland, and we have a 24-hour hotline. If you need [help with] legal issues, counseling, even if there’s an abuser trying to get help, we have those types of resources as well.”