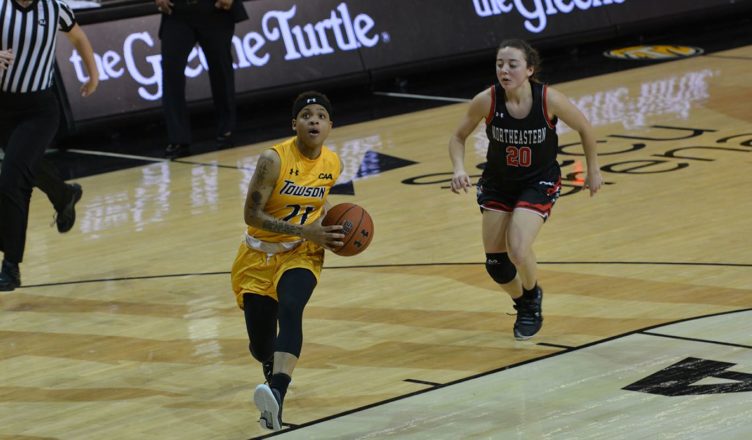 The Tigers swept their opponents off their feet on Valentine’s Day weekend, going 2-0 with convincing wins over UNC Wilmington and College of Charleston. After several slow starts that were rampant throughout the season, the Tigers finally came out the gates the way they liked to on both ends of the court.

The emergence of freshman center Janeen Camp and the steady play from Towson’s duo of redshirt sophomore Kionna Jeter and junior Nukiya Mayo also led to the successful weekend.

“There’s always room for improvement you know coaches are never satisfied,” said Head Coach Diane Richardson, jokingly nudging at Mayo and Camp. “We’re doing really well and we still have quite a few games to go and so the thing is to be consistent.”

“This was a very well played, up-tempo game,” Richardson said. “We want to have our identity [be that] and it’s running on the back of Friday night’s game.”

The Tigers built on their Friday win with another stellar performance on both ends, holding the Cougars to just 37.5 percent shooting and 26.1 percent from beyond the arc.

Towson jumped out to a 21-12 lead early and never looked back, only allowing Charleston to come as close as 28-24 after a jumper from sophomore forward Lexi Maddox.

The Tigers erased any doubt with a 10-0 run sparked by Durjan and sophomore guard Jalynn Holmes.

The second half was where Towson took over, outscoring the Cougars 21-9 in the third quarter.

“We knew we had depth,” Richardson said. “They prepare and practice every single day when they’re number gets called they come out on the floor and do what  they need to to do.”

On Friday evening, the Tigers were able to outlast UNCW, 87-61. Jeter led all scorers with 22 points, followed up by 17 points and nine rebounds from Mayo, and 11 points and eight boards from Camp.

Senior forward Chinyere Bell and redshirt junior Gigi Smith were the only double-digit scorers for the Seahawks (15-8, 8-4 CAA), contributing 17 and 13 points respectively.

From start to finish, the Tigers led the contest, only allowing one tie all night, late in the second quarter at 24 after Smith drove into the paint for a layup.

From there, the Tigers closed the half out on a 7-0 run, powered by Jeter’s patented pull-up jumper and Mayo, who scored on a baseline jumper with four seconds to go in the half.

The late run gave Towson a 31-24 cushion going into the second half. The Seahawks came into the second half with some renewed energy, climbing their way back and closing the deficit to 38-36 after junior guard Ahyiona Vason knocked down a three-pointer.

That would be as close as UNCW would get the rest of the game. Towson responded with a 10-0 run, and went into the final frame with a commanding 55-41 lead. The Tigers only needed one more run to solidify the lead, building an insurmountable 63-43 lead, highlighted by Mayo muscling her way to a second chance layup after gathering a Jeter miss.

“It means a lot,” Mayo said on the statement win. “We had the lead at [UNCW], and we gave it up and so we knew that when they came here we were going to play hard.”