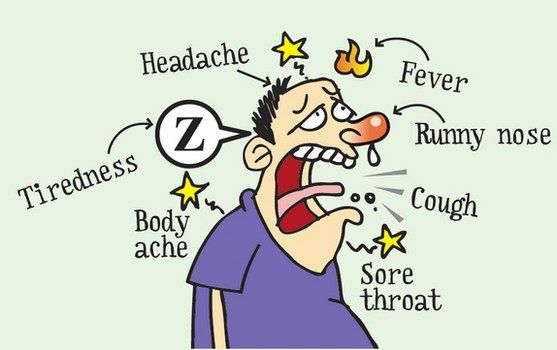 On Friday it was reported that last week, 1 in every 13 visits to the doctor were for flu-like symptoms. This is the highest level it has been in a decade, according to Time Magazine.

For the first time in 13 years, the U.S. Centers for Disease Control and Prevention reported that as of Jan. 6, every part of the continental U.S. showed “widespread” flu activity, according to Time Magazine.

The flu has taken 22 children’s lives between Feb. 10 and Feb. 17. The number of flu-related pediatric deaths this reported is now at least 84 in America since Oct. 1, 2017, according to the latest report from the CDC.

Director of the Health Center Matthias Goldstein and Health Center medical staff member Dr. Rocela Lopez answered some questions to give advice to students on how to stay healthy during the flu season.

What exactly is the flu? How can students determine if they have it or not?

Influenza, well known as the “flu,” is an acute respiratory illness caused by viruses. Typical symptoms are abrupt in onset and include fever (defined as temperature elevation 100 degrees or above) combined with either cough or sore throat, or both these symptoms are present. Other symptoms that might occur but not necessarily present are headaches, body aches, nasal stuffiness and fatigue. Flu season occurs during the colder months.

Exactly how bad is the flu this year for students?

The academic calendar is always helpful to us because campus is closed as flu spreads across the country in late December and through January. That said, we always have an upswing in flu cases in February and early March.  Fortunately, we are not seeing as many flu cases [at Towson] as being reported across the country.

Are students more likely to get the flu/ more highly prone when on campus? How so?

We have a “natural” level of protection due to students being off campus until late January.  Anytime a large number of people lives in close quarters, there is a risk for flu spread.

What should students do to prevent the flu/ protect themselves from it?

Get the flu shot each year; try to avoid close contact with sick people, cover your nose and mouth with a tissue when you cough or sneeze; wash your hands often with soap and water (if soap and water are not available, use an alcohol-based hand rub); avoid touching your eyes; nose and mouth, clean and disinfect surfaces and objects that may be contaminated with germs like the flu; and while sick, limit contact with others as much as possible to keep from infecting them. If you are sick with flu-like illness, CDC recommends that you stay home for at least 24 hours after your fever is gone except to get medical care or for other necessities. Your fever should be gone for 24 hours without the use of a fever-reducing medicine.

Can you get vaccinated and still get the flu? Why/ why not?

Yes, each year health experts predict what flu viruses will be spreading that year. They are not always 100 percent correct. This year, the flu shot is only about 1/3 completely effective.  If you do get the flu after getting the flu shot, the hope is that you won’t get it as badly.

Flu vaccines are primarily given prior to the onset of the flu season before around October.  After that time, the CDC still recommends anyone over the age of 6 months to get the flu shot up until there are none left, or the flu season is over.  Its officially not too late but availability might be an issue.

What are the benefits of flu vaccination?

Flu shots help your body learn how to fight the flu so that when it hits, you can then fight it off. The flu vaccine exposes your body to a “killed” form of the projected flu virus for the upcoming season.  Your body’s immune system then builds up immunity (meaning it trains itself how to fight it off). Then when the real flu hits, your body is ready to fight it off. Even when the flu shot is not completely effective as is the case this year, it still makes the flu cases less severe if you get it.

What vaccines are recommended? What are the differences between them?

Recommended Flu Vaccines: Trivalent (3 compound vaccine) and Quadrivalent (4 component Vaccines). There is a standard trivalent flu shot (inactivated influenza virus) and another one that is a high dose trivalent shot for older people above age 65 years old. There is the egg free recombinant trivalent shot and another one that has an adjuvant (added ingredient that helps create a stronger immune response in the patient’s body for those who are  65 years and older).  There are also quadrivalent shots available that covers two types of Influenza A and 2 types of Influenza B.

When does the flu season usually peak? Why?

The timing of flu is very unpredictable and can vary in different parts of the country and from season to season. Seasonal flu viruses can be detected year-round; however, seasonal flu activity often begins as early as October and November and can continue to occur as late as May. Flu activity most commonly peaks in the United States between December and February. The flu dies out when there is no one else to spread it to, either people protect themselves or built up immunity from the vaccine or after being exposed.

What are emergency warning signs of the flu?

In adults: difficulty breathing or shortness of breath, pain or pressure in the chest or abdomen, sudden dizziness, confusion, severe or persistent vomiting, and flu-like symptoms that improve but then return with fever and worse cough.

Anything else you’d like to add? Any more general care advice?

The treatment for flu is generally supportive care, meaning: rest, keep hydrated, and taking Tylenol or Motrin for fever.  Antibiotics do not help with the flu and antivirals are generally not needed.  For high risk individuals, such as those with asthma, diabetes or heart disease, antivirals may be indicated.