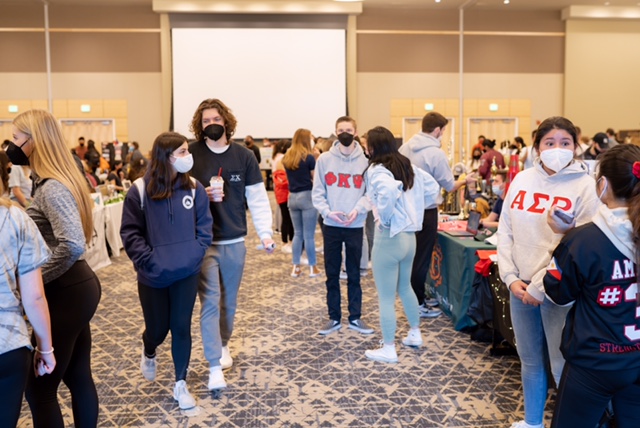 Student clubs across campus are experiencing a revitalization of member involvement now that Towson University (TU) is back to in-person learning.

“For dance groups, their operations were basically completely suspended,” Rindosh said. “They literally can’t do their activity during COVID-19. So for them, it was basically a hard pause on everything. But then we had other groups that actually operated almost seamlessly.”

According to Rindosh, only 12 new clubs were started during the virtual year, a number that has more than doubled to 28 as TU returned in-person in the 2021-2022 academic year. Rindosh said that he believes most of those 12 clubs were started by older students who experienced life on-campus before the pandemic.

“Engagement across the board was down,” Rindosh explained. “For students that are new to campus or new to this virtual environment, they have never been a college student before. They don’t know necessarily how to even find out about clubs. There is information on the websites, but you have to go looking. You don’t have the in-your-face fairs, you don’t see the flyers across campus, you don’t see the big events that are happening.”

Rindosh, along with Kelly Carpenter, assistant director of campus programming, are running a TU campaign to develop student involvement in post-COVID-19 campus life, a project that Carpenter said will expand on ideas developed over the past year both on and offline.

“Our goal is to roll out the campaign beginning with orientation this summer,” Carpenter explained. “We recently took advantage of the Student Organization Town Hall to gather some feedback from organization representatives. The representatives were presented with some of the tactics we have identified to address specific objectives within our campaign.”

The campaign asked representatives from the organizations to vote yes or no on the tactics and the feedback “will be reviewed by the Involvement Campaign working group and further student feedback will be gathered using other methods,” according to Carpenter.

Senior Tionte Smiley described how the student radio station, XTSR, was a ghost town when students got back to campus last fall. Smiley said it looked like no one had been in the studio since the pandemic started.

“When I first joined, it was just me and a person named Dana in the office,” Smiley said. “The first couple of weeks, it was literally just us doing work and we’d leave like an hour or two afterwards and there was no radio shows and we kinda had to reset the whole entire studio.”

Smiley described how he started the recruitment process, which led to people slowly starting to make their way to the station, as well as the return of previous members. From just two people in September, XTSR grew to 56 members.

“Hear that?” Smiley said, referring to the laughter and chatting that could be heard from outside of the studio. “Yeah, in September, that wasn’t there. Now, people stay there regularly, because they want to be in this atmosphere. That’s like our chill out space.”

XTSR currently has a full line-up of radio shows, with 20 one-hour-long shows during the week, which are run completely by TU students, including Smiley.

Other clubs saw a similar slow climb back to normal operations. Alumnus Meghan Hudson and also former editor-in-chief of The Towerlight, TU’s student run newspaper, recounted how their procedures changed.

“Involvement dropped significantly during virtual semesters,” Hudson said. “Students seemed to be super burnt out and feeling disconnected from school. Plus, with no in-person events, the only topics we had to write about were all COVID-19 related.”

The current editor-in-chief, Jake Shindel, is a sophomore, which, according to Hudson, is a first for The Towerlight. The position is usually held by a junior or senior.

“I think being EIC as a sophomore is very beneficial,” Shindel said. “I was not here to experience The Towerlight when it had tons of editors and writers, so I am fresh with ideas on how to grow in the digital age of journalism.”

Shindel said it’s been tough to get new writers engaged and interested in writing about news events, which has presented additional challenges to operations. Shindel maintained that they are “working with what [they]’ve got.”

Jordan DeVeaux, TU’s Student Government Association (SGA) president explained how the struggles of “advocating for students that you can’t see” made way for stronger and, in some positions, younger leaders.

During the virtual semesters, DeVeaux said that SGA was focused more on member retention rather than member recruitment.

“I think everyone was just being a lot, I think gentler with each other,” DeVeaux said. “People were like, ‘Okay, the members that we do have, let’s just make sure that they’re engaged and that they feel valued.’ We wanted to make sure they were really strong and felt a sense of belonging.”

SGA kept some of the new tricks that allowed for a more hybrid approach to events, such as live streaming all of the meetings.