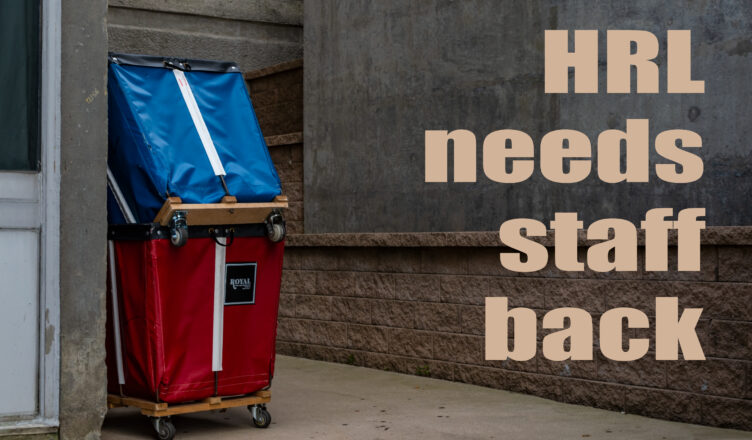 Towson University’s Office of Housing and Residence Life is asking its student staff to return to their positions after plans to employ security staff for the remainder of the semester fell through.

HRL’s plan was to outsource front door coverage through security company, BTI Security. According to Lisa Simmons-Barth, Assistant Director of Residence Life, the company notified HRL that they will not be able to provide coverage through the fall term, thus leaving HRL with  no community center coverage.

“My initial response, as a CCA, was that I wished they had told us sooner,” said Sarah Skordas, a CCA in Douglas Hall. “I was working my last shift when my RLC was notified of the situation, so it wasn’t just CCA’s who weren’t aware of this until last minute.”

Previously, the staff were told their shifts would end on Sept. 4. However, staffers were notified the morning of the fourth by their managers that HRL needed coverage through the weekend. Staff picked up these last minute shifts, and are providing weekend coverage. By that night staff was contacted by HRL, and notified of the need for coverage through the entire fall term.

“As you know, staff quickly worked to cover through the holiday weekend and early next week,”  Barth-Simmons emailed staff. “We are now in need of CC staff continue to work in the following communities: Millennium, Paca, Tubman, Carroll, Marshall, and Tower C/Towson Run for the duration of the semester.”

However, most of the staff have already moved off of campus.

“I think since this change was informed to us so last minute, a lot of CCAs won’t re-change their plans for a third time,” said Skordas. “I knew CCAs who had completed the last of their shifts and had moved out prior to Friday, Sept. 4th, the likelihood of them re-moving back in after all this frustration just doesn’t seem very plausible – especially since we still have classes going full-swing and schoolwork to stay on top of.”

HRL is offering an alternative housing solution at the expense of the staff.

“Because many staff have moved out already, there is potential for CCA staff to live in Extended Stay Housing on a space available basis,” emailed Barth-Simmons. “This option would be at your expense.”

According to the University, they are looking to temporary employment positions, and offering financial relief to staff.

“For those students unable to fulfill temporary employment opportunities, the university will consider additional financial resources,” the University stated. “TU remains committed to limiting the financial hardships on students during the pandemic.”

Those who are interested in returning to work as a CCA for the fall term may fill out a survey they were emailed by HRL. Or, they may choose to remain on furlough if they are unable to return.

Some staffers believe that HRL is posing the situation as the staff’s decision to avoid taking responsibility for those who are unable to return.

“I think that the illusion of choice HRL is giving to us student workers is very accurate,” said Skordas. “[…] They don’t want to make it seem like they have furloughed us, because that would require them taking accountability for how their communication with student-workers (or lack thereof) impacted us.”

Skordas also believes that financial relief should be made available.

“I understand this situation isn’t HRL’s fault, but student workers were under the impression that we would be able to work and have shifts […],” said Skordas. “I personally planned to work, and was excited for my job and to be able to make some money to gain some financial independence, and now it’s looking like I wont be able to go back to work until Spring, and thats if campus reopens and I decide to return.”

HRL says more details on temporary employment options, as well as additional avenues of financial support, will be shared soon.

“We know that this swift chance of course is confusing and stressful,” Barth-Simmons emailed staff. “Please know that all previous changes in staffing were made with the information we had at that time.”