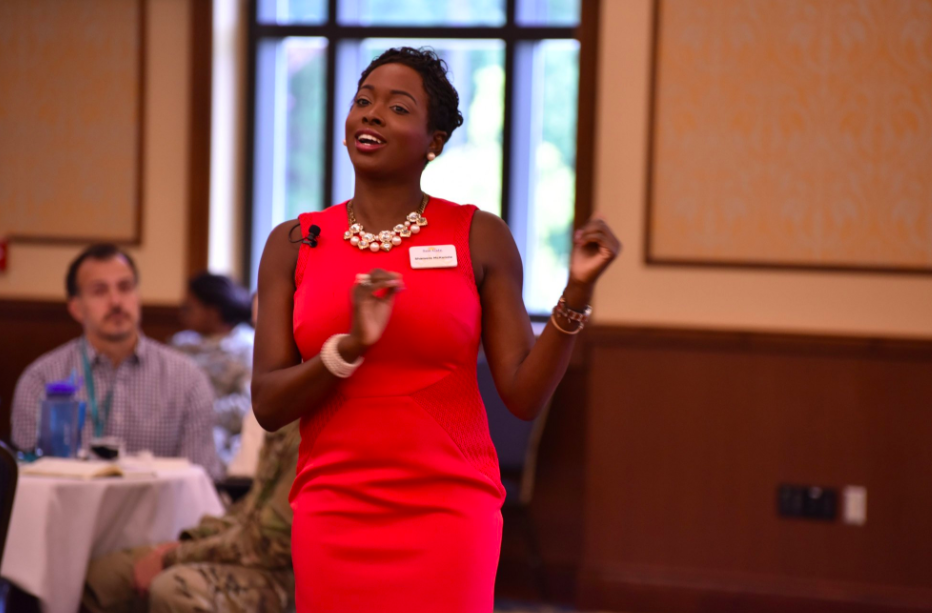 Shamere McKenzie was trafficked for 18 months before she escaped her abuser. McKenzie, who is now the CEO of the Sun Gate Foundation, a nonprofit organization dedicated to combating human trafficking and providing educational opportunities to survivors, shared her experience with overcoming sex-trafficking as a part of Sexual Assault Awareness Month at Potomac Lounge April 3.

McKenzie said victims of trafficking are often dehumanized, but that her experiences as a survivor of sex-trafficking don’t make her any less of a human being who deserves respect.

Before she was trafficked, McKenzie was a college student struggling to pay her tuition.

After a charismatic man complimented her and they struck up a conversation about her passions, the man offered to let her live in his basement to alleviate some of her expenses. McKenzie moved into the man’s house, then took a job at a strip club at the man’s suggestion. The job became overwhelming when she and the man got into an argument over giving a customer oral sex, then it got physical when he put his hand around her neck and threatened to kill her.

“My whole life flashed before me,” she said.

The abuse McKenzie endured went on for 18 months, and her trafficker abused other victims. McKenzie escaped after the man threatened to kill her with an unloaded gun, and she sought help when she encountered a random bystander.

McKenzie pulled from those experiences to earn a full scholarship to Loyola University where she got a degree in criminology and criminal justice.

Human trafficking is defined as the exploitation of a human being for someone else’s profit.

McKenzie discussed the culture of human trafficking, including the language, code of conduct, and the consequences for disobedience. She explained that “romeo pimps” initiate romance with their victims then abuse them, “gorilla pimps” are the most violent and abuse their victims for every single thing they do, “booster pimps” use drugs to control their victims, and “sneaker pimps” don’t have a car.

Continuing to talk about the different language of human trafficking, McKenzie explained, “lot lizard” is a person who gets exploited at a truck stop. She said truckers will note a person who’s wearing red, black and white, and tell fellow truckers that there is a “lot lizard: red, black, and white” and so those truckers can proposition the person for sex.

“Wife-in-law” is a term in which female victims who are under the same pimp describe each other. A “date” is when you engage in commercial sex. “Trick” can refer to a client or a sex act, McKenzie said.

In the midst of the “Me Too” era, McKenzie examined media that inspired and glamorized the objectification and degradation of women, such as Hooters, Three 6 Mafia’s Oscar-winning “It’s Hard Out Here For A Pimp,” Robin Thicke’s “Blurred Lines” song and music video, and the Grand Theft Auto video games.

“We all have a role to play in the fight against human trafficking…. Change starts with [us],” McKenzie said.

She left the audience with two questions to consider: “What is your issue?” and “what are you doing about it?”

Junior Paige Boyer found the event to be “powerful.”

“I think it was really saddening to hear exactly what happened with [McKenzie]…. I think that it’s definitely an important issue that needs to be more relevant in conversations with everyone.”

“On college campuses, sometimes when we talk about sexual assault, we really focus specifically just on college students and just what’s happening on our campus and I really wanted to have this opportunity to open this up and let us think about what else is happening in our communities outside of our campus, across the country, and globally related to sexual assault and sexual violence,” Carden said. 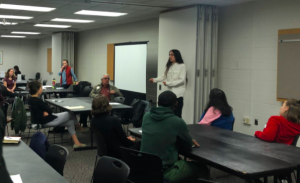