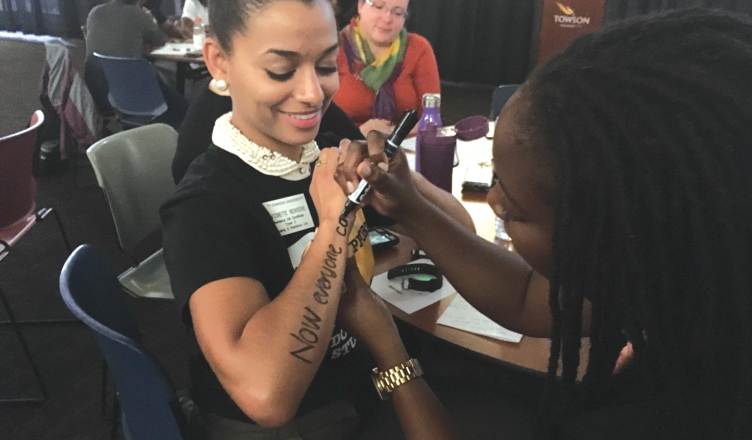 Where social media allows users to cultivate the image of themselves which they desire, the Dear World organization aims to crack even the most private stories open, because even the most personal stories can present the opportunity for solace within a community.

“My parents divorced when I was four,” said Chambers, a senior. “It didn’t affect me until they remarried. The aftermath has had an effect on my life and my relationship with my father.”

“It hasn’t been the same” was her personal message, one of many that were shared during the event.

The Division of Student Affairs and Office of Student Activities hosted Dear World on Sept. 13-14, giving members of Towson’s campus an opportunity to share their experiences.

The event began on Wednesday as a preview with several members of SGA, faculty and members of other student organizations. There, they got to see what Dear World is all about: sharing meaningful messages through portraits, and building community throughout the world.

“No matter what, no matter where we go, we find that people have things in common – people that they love, and stories that they tell,” said Dear World Storyteller Casandra Corrales.

On Thursday, everyone in school was invited to attend an open event in the University Union in the afternoon and a more formal event in the evening, where Corrales gave a presentation, several students shared their stories to the audience, and everyone in attendance got to create their own portraits.

As part of the Dear World project, everyone was asked to construct their own messages by brainstorming important moments in their life, sharing with others, and coming up with a message that defines them. They then wrote the messages on their bodies and proudly posed for their own portraits.

“The portrait is a lede to a story only you can tell,” Corrales said. “The message should evoke curiosity.”

The project now known as Dear World started in New Orleans in 2009 after  Hurricane Katrina. It began as a way for members of the community to show love for their city and boost morale during the repair process.

One man stepped in front of the camera and did something different than the others. He presented the message “Cancer free” written on his chest, as he had just found out he was in remission only moments ago, and the facilitators of Dear World realized this was about so much more than what was originally intended.

“I encourage everyone to have hard conversations,” said Corrales to the portrait volunteers. “Be curious. Open up to vulnerability.”

Today, Dear World consists of five storytellers who travel around the world taking portraits. To this day they have taken 70,000 portraits of individuals like the Pulse Nightclub survivors, Syrian refugees, and people involved in tragedies like the Boston Marathon bombing.

“Creating a connection is what we strive for,” said Corrales. “Give people an opportunity to speak and they will share their experiences with others.”

Participants of Dear World wrote messages that were personal, such as Vice President for Student Affairs Deb Moriarty, whose message was about a big change in her life, or Jharana Chalise, whose message was, “As I got older I understood” to represent coming to terms with her past.

“It’s easy for me to feel unwanted. I have to realize I’m all I need,” said Jordan Ogbonna, whose written message was, “I had to make a home for myself.”