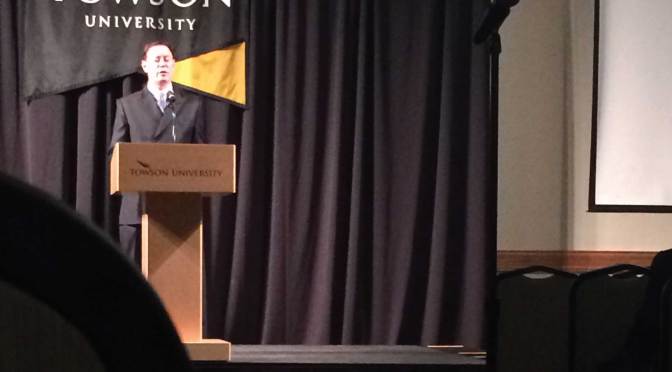 Author and activist Andrew Solomon described how diversity unites certain groups of people in the face of adversity in society and at home Tuesday, Sept. 13, as part of Towson President Kim Schatzel’s inauguration week activities.

Schatzel, said that she’s “had the pleasure” of hearing Solomon speak before, and immediately thought of him to give an inaugural lecture.

“It’s the most compelling work that he’s doing in so many areas of LGBT rights, mental health and just the area of difference,” Schatzel said.

Solomon is a writer and lecturer on politics, culture and psychology. He is a professor of clinical psychology at Columbia University Medical Center and president of the PEN American Center, an organization created to unite human rights with the freedom to write.

Solomon went on to explain his idea on how “there are two kinds of identities.”

“There are what I call vertical identities that get passed down from parent to child across generations, so one’s ethnicity, usually one’s nationality, one’s language, frequently one’s religion,” Solomon said.

A member of the gay community, Solomon said he can relate to others who have this horizontal identity and spoke about the process parents go through to accept their children.

There is a difference between love and acceptance, he says.

Solomon believes that ideally, a parent loves their child from the start, but no matter the type of identity, it takes much longer to learn to accept that child for who he or she is, simply because no child becomes exactly who the parent expects.

Solomon’s children will have their own identities and he will accept them and allow those identities to become part of his own, he said.

Solomon’s works include “The Irony Tower: Soviet Artists in a Time of Glasnost,” “The Noonday Demon: An Atlas of Depression,” as well as the book his lecture was based on, “Far from the Tree: Parents, Children, and the Search for Identity.”