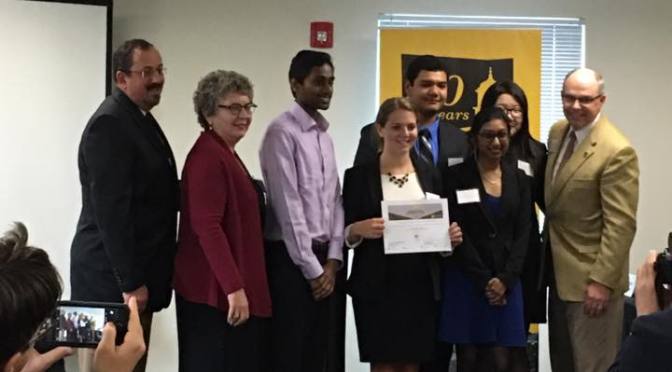 The teams behind Sureshunt and Communication APPtitude were announced as the winners of the sixth annual Towson University Incubator Business Plan Competition, in the student and professional categories respectively, May 4.

“I think this is a terrific program,” TU President Kim Schatzel said. “All of the teams were great, they add to the economic growth.”

Sureshunt is an improved catheter that “aims to reduce the number of obstruction related shunt failures,” as explained on their website. The catheter also will function for a longer period, and to prevent tissue growth in it.

Sureshunt’s team was part of Hopkins’ Bio Engineering program and consisted of students Angela Park, Gabriela Frid, Ravindra Gaddipati, Darius Tolbert, Priya Arunachalam and Kamran Siddiq. The group will be looking to test accuracy of the catheter through further research and development. In the future they will seek FDA approval for their product.

Beth Lawrence and Deena Seifert, both certified speech-language pathologists, created  Communication APPtitude. They have two apps out for Apple tablets, Infercabulary and Wordquations.

Infercabulary helps users understand nouns and adjectives. The app shows five different pictures depicting a word such as “occupant” and the user must pick that word out of a small list of choices. The app also offers a game version. Wordquations is a complementary program that helps teach verbs. Infercabulary will be available online soon.

CA has recently joined TEDCO and received funding from them. TEDCO is a Maryland based independent organization that helps fund startup businesses. They also have current residency within the Incubator, along with seven other businesses. They are also finalists in the Milken-Penn GSE Education Business Plan Competition and Conference on May 11 and 12 in Philadelphia.

This year, there were a record 52 entrants in the Business Plan Competition, which then were narrowed down through three tiers of competition. Nine finalists, split between professional and student categories, gave two-minute lightning presentations to conclude the competition May 4.

The winners will receive a six-month associate TU Incubator membership, a cash prize and an in-kind prize from sponsor 99 Designs.

The seven other finalists included products and business plans like Jang*go, a portable tablet-holder that also works as a selfie stick, the Mojoe Mobile Brewer, which is a portable coffeemaker that doubles as a thermos, and Moe’s Auto, a do-it-yourself body shop where customers can use the garage’s equipment for $20 an hour.

“We have a whole generation of people that want to do things on their own,” Moe’s contestant Brian Scalo said.

Mobtown Fermentation, another proposed business, started with one location and now has 70 in Maryland, Virginia, and the Washington D.C. area. They produce a wild kombucha beverage which is exclusively organic, vegan, raw and gluten-free. Vizier Grooming Brands is a grooming company which caters to African American men, while Agoge Automation’s goal is to improve efficiency at restaurants using its spin out silverware wrapper. HireAStudent.org was designed to help connect TU students with small businesses, providing the students with work experience and also helping invest in the community’s future. 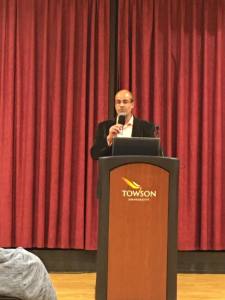