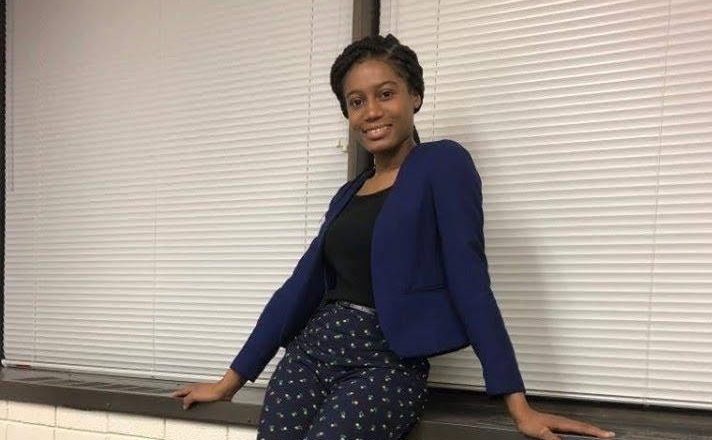 Coming from the small West-African country of Togo, much of Rachida Koudjra’s life was spent with her family. Whether it be moving to a new country in Africa or simply getting by a hectic day, to Koudjra home is the people she surrounds herself with.

“Togo is not a big country, but we have a large sense of community and family. Always together, always cooking, always gathering on Sundays to hangout before the start of the week,” Koudjra said. “My life was more based on the family and community. Everything I was doing I was doing with family, so I grew up always being surrounded by people.”

The Togo native had always been within the embrace of her family and her community. One day during her senior year in high school, she decided to move to the U.S.

“I came to the U.S. in 2018,” Koudjra said. “It was my ambition to come here. I was curious and looking for an adventure. Especially something different from back home.”

Through the unwavering support of her parents, she was able to come to the US and study at Towson University as a Biology major while also showing interest in the Pre-Med Undergraduate Program. Though an ocean away from the familiarity of her homeland and her family, Rachida was looking forward to taking on new challenges in the US.

Languages became Koudrja’s first challenge. Though she had studied English in the classroom for years, coming to an immersive English environment she was faced with communication struggles.

“Language was especially different,” Koudjra said. “There were times I would translate from French to English and it would sometimes confuse people because what I said wouldn’t make sense in English. I also have a hard time understanding what people are saying. It’s one thing to learn English but listening to it all day long is different. I read a lot. I asked a lot of questions during lecture, and when I did not understand a particular lecture, I would watch videos of the topic in French and then in English. I eventually got used to it.”

As a sophomore, Koudrja continues to do her best in order to stand out from other students in hopes of finding professional opportunities in the U.S.. She worked as a student aid for the International Students and Scholars Office (ISSO), she has worked as a community center assistant for ResidenceTower, as well as a student liaison in Global Village (housing for international students in Towson). In addition to these jobs, she actively involves herself on-campus as the secretary for International Student Association (ISA) as well as volunteer as a Lead-Tutor in L’aventure Française.

“Rachida is a diligent team member who takes things in stride,” Sanders said. “We can count on Rachida to adapt, innovate and maintain a human touch in her work with ISA and ISSO. She is so busy between her demanding academic program and her co-curricular involvement. I think it’s admirable that she is able to keep a positive attitude even in stressful moments.”

“She was very good at her job and she was very professional about it. She knew how to talk to the residence properly,” Kah said.“I think the quality that makes her good at what she does is her great community skills. I feel like if you were to go for her for advice, she would give the best advice ever.”

With work, extra-curriculars, as well as maintaining her grades for med-school, many of her coworkers agree that she continues to give her best despite the challenges and the stress experiences. Becoming independent, she has been able to grow as a student and as an adult coming to America. Only a sophomore, she experiences  a lot of stress and pressure to do her best.

“I have been doing a lot more exercise. It helped me release stress. I went to Yoga classes at Burdick. I have understood the importance of sleep. Sleep is a gift. It is a luxury,” she said. “With a lot of things going on, I have learned to value personal time. I sing, I keep of my volunteering moments and how my days go, that time is all for myself and it’s important to me.”

With many international students experiencing similar struggles that come with studying in the U.S., she gives advice to those in need.

“It takes a lot of courage to get out of your environment and to go to a new place in order to find something for yourself. Being here itself is amazing. If we made it this, who knows how far we’ll go? We can keep going,” Koudjra urges. “No matter what happens, keep your eyes on the goal and just keep find your way through it. If plan A doesn’t work, there’s always a contingency. There’s always a way. Victory is a lot sweeter at the end when you give it your all.”