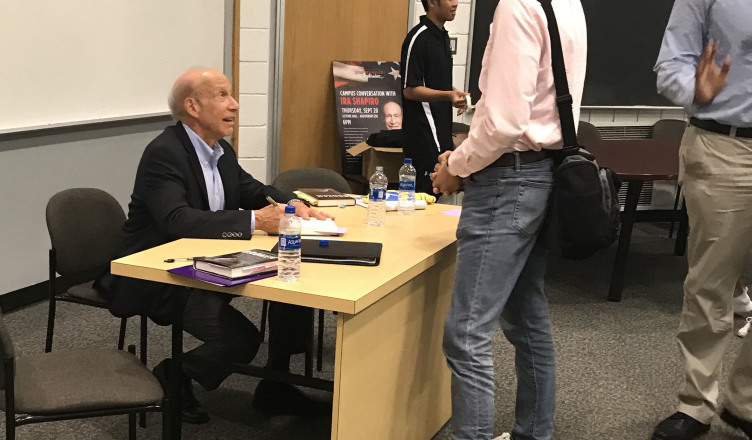 Author and International Trade Lawyer Ira Shapiro spoke during a “Campus Conversation” Sept. 20, which was hosted by the department for Civic Engagement and Social Responsibility.

Shapiro started the conversation by addressing why he has passion for speaking to student audiences.

“We share something in common, I came of age during crisis times,” Shapiro said. “We were in schools during the period identifiable to the Vietnam War. You’re growing up and coming of age in crisis times as well. It’s a different sort of crisis- a crisis presented by the Trump presidency.”

Shapiro noted that his book, which is about the Senate, is because he “has something of a fixation about the Senate.” Shapiro interned at the Senate right after college, which he said gave him an idea of how to contribute to public service.

“The Senate is the balance wheel in our system,” Shapiro said. “At its best, it’s the place where problems get worked out, and it’s the place where the two parties get together, to try to overcome their differences and find common ground. The Senate played a crucial role. In the words of the great play ‘Hamilton,’ ‘it was the room where it happened.’”

Shapiro noted that the system of government has been facing a “long break down,” which he said Donald Trump was a product of.

“The Trump presidency could either cause a destruction of our democracy, or the resurgence of it,” Shapiro said.

The gradual decline of the politics of the Senate has been happening since the 90s, according to Shapiro. He continued to talk about leaders, specifically noting Senator Mitch McConnell.

“I have written and believed that McConnell is a unique figure in our politics,” Shapiro said.

Shapiro continued to discuss the issues regarding checks and balances of the Trump presidency, where the country needs the Senate the most.

“The thing that’s most worrisome about the decline of the Senate is that at a time we need the Senate to be at its strongest, it’s actually been at its weakest,” Shapiro said.

After Shapiro finished his discussion, Political Science Professor and Faculty Director of the Honors College Doctor Alison Rios Millett McCartney along with Civic Engagement Fellow junior Sophie Bertrand sat alongside Shapiro for a panel discussion led by questions they curated and audience questions.

McCartney led an informal audience poll,  asking “how many of you think that you might be somewhat locked out of participation in the American system because of money?”

This led to a question and response from Shapiro regarding the context of money and being involved.

“I think that while politicians respond to contributors, they also respond to citizens who are involved. They do not neglect citizens,” Shapiro said.

Questions ranged from asking about Trump’s social media accounts to addressing Shapiro’s stance on term limits. Copies of Shapiro’s book were given out to students whose questions were picked to be answered on the panel.

Bertrand regarded the importance of Shapiro’s message on a student body and what she learned from his book.

“I think it’s really nice when people heavily involved in politics come down, get involved, talk to students, and get them engaged,” Bertrand said. “Reading that book opened my eyes to a lot of issues.”

According to McCartney, everyone can learn a lesson from hearing from experience.Ira Shapiro

“We can all benefit from the voice of experience,” McCartney said. “If we want to know how to fix our problems, we have to know what has worked well before.”