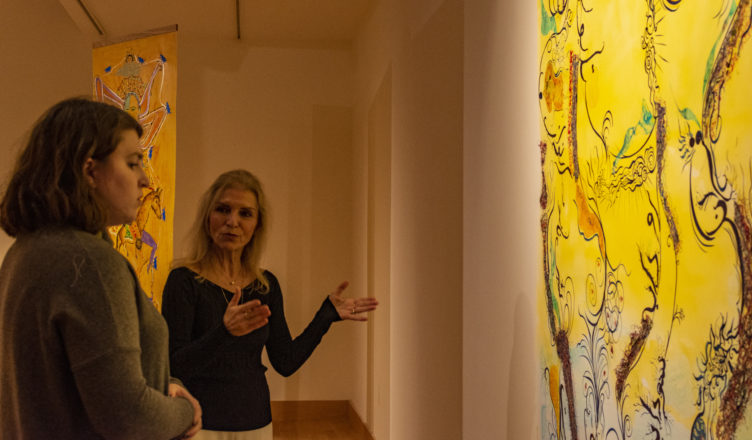 One seminal work in Persian literature is the “Shahnameh,” which is roughly translated to mean “Book of Kings.”

“He was the great poet and he worked 33 years on this book, and it was one of the largest poetry books that’s been published, and in different languages,” Rahmanifar said.

Her exhibit opened with a “Meet the Artist” event on Feb. 13. Here, Rahmanifar met with interested students and staff to share her story, and her artwork.

“I spent half of my life in Iran,” said Rahmanifar. “So it’s basically, I am the product of before revolution and after revolution. The Islamic revolution happened in 1979 and so I was born, kind of long ago before the revolution in 1979 started. After, I moved to the U.S.”

After moving to the U.S., Rahmanifar shared that her work became very personal, as in her experience, the revolution was not good for the women in her life, and Iranian women as a whole. She also found inspiration through the women of “Shahnameh.”

“These women, they were really the type of women that stood out in terms of wisdom, in terms of empowerment and in terms of leading roles that they were a really, kind of, gravitating area in the book,” said Rahmanifar. “They had authority in that poetry book, I mean I’m talking about thousands of years ago. It was amazing.

Rahmanifar said she felt both inspiration and motivation to create images which would not only portray these women, but also revive them.

“So with all these years, I’ve been working on the same thing and exploring different areas, and this woman of Shahnameh basically one of the inspiration that I had by reading, you know, kind of encountering some great number of women in Shahnameh and I was really inspired by that,” said Rahmanifar. “So that’s my more recent project today.”

She also noted that men dominated the areas of Persian painting and ministry until the 20th century. Rahmanifar was fascinated to capture that historical view of Persian women, and bring it into a completely new interpretation.

According to Rahmanifar, she utilizes a large scale in relation to empowerment. “If you look at these images, they’re looking at us and we’re looking at them,” she said. “There is a visual, epic, kind of poetic, epic story that they’re really trying to convey, and I wanted to really focus on that kind of aspect of it.

“[I liked] the one with the white lines,” added Wiggins. “I immediately thought of that confining, jail-like aspect to it. It’s almost like she can’t really break away. She can’t really break away, and also, the dramatic aspect of the hands grabbing, that is something that I feel like, as you know, no matter where you’re from, women can all kind of relate to.”

The dialogue between the audience and the figures was very important to Rahmanifar, as she didn’t want them to just be imagery.

“They’re really communicating and making a dialogue with the viewer, and basically reviving those kind of old and kind of historical aspects of Persian woman, and kind of transformed that into a completely different kind of view that with this scale,” she shared. “With the colors, with the kind of gestural, kind of movement of the body and all, that was my intention so not just portraying the imagery but also focusing on the aspect of their empowerment and the authority of these women.”

Senior, Bridget Devoy, says she also felt touched by the story within the artwork.

To students, Rahmanifar said you need to be able to take risks, and just go for it.

“Experiment with different materials as much as you can, even if it’s not working, that’s fine too,” she added. “You know, but my advice to students is to really take advantage of this opportunity and bring some interdisciplinary kind of ideas into their projects and work in a different variety as I am doing that. You know it’s a mixed media, I really worked with vellum paper, which I’ve never worked before and this was a really ambitious project.”

The Women of Shahnameh, The Women of Afarin Rahmanifar is on display in the Asian Arts Gallery located within the Center for the Arts now through May 16.