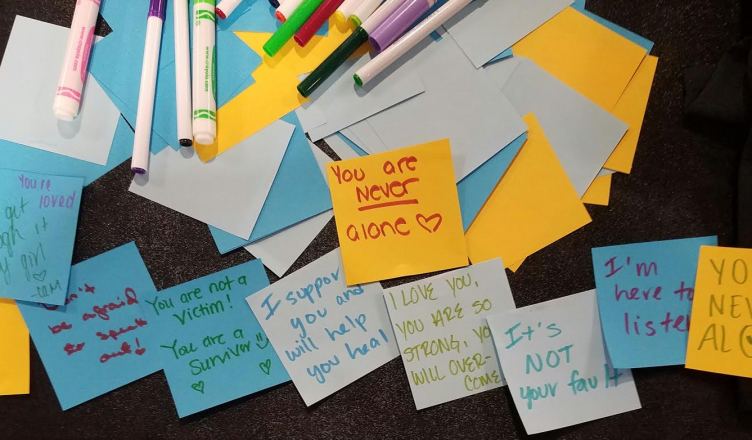 One in five women and one in 16 men are sexually assaulted while in college, according to the National Sexual Violence Resource Center. SGA Director of Health and Wellness Missy Ronan and Towson University at large are trying to drastically reduce those figures with the It’s On Us Week of Action and other events and initiatives to combat sexual assault.

Various Towson student groups and organizations banded together to raise awareness for sexual violence, and to support survivors of sexual assault and rape, during the It’s On Us Week of Action.

The Week of Action, spanning April 3 through April 7, kicked off Sexual Assault Awareness Month with events and interactive activities across campus to spark an ongoing conversation about sex, consent and sexual assault.

Ronan said she likes to believe the student body has a general understanding of what consent is and that society now needs to move towards operationalizing that definition.

Ronan believes that a large part of supporting survivors of sexual assault is giving agency back to the survivor.

“I think the first step is changing the connotation that survivors are necessarily ‘victims’ and understanding that some survivors do not identify themselves as victims because of the situations that they’ve experienced,” she said.

Ronan said situations can be tricky with institutions like Towson, which must follow certain steps for reporting instances of sexual assault under Title IX. However, at an individual level, Ronan believes it is important to give the choice back to survivors.

It’s On Us is a nationwide campaign to combat sexual violence. In November 2016, Towson University became an It’s On Us Campus Innovation Partner School, working with a network of other partner schools to end sexual assault on college campuses.

Monday, April 3, was the International Day Against Victim Blaming. Towson’s Sexual Assault Peer Educators (SAPE) partnered with the Wellness Peer Educators and Student Government Association (SGA) to host a tabling event in the University Union lobby from 10 a.m. to 2 p.m.

Members of the Towson community were encouraged by organization members to take the pledge to end sexual assault. The event also featured interactive activities, questions and giveaways to get students engaged in sex-positive conversations.

On Tuesday, April 4, the SGA collaborated with the Office of Civic Engagement to educate students on legislative updates related to sexual assault, sexual violence and sexual health policies in the Paws Pavilion from 11 a.m. to 3 p.m.

While attending Tiger Pride Day in March, Ronan said the SGA lobbied for a bill related to sexual assault. She said current laws in the state of Maryland make it almost impossible to prosecute sexual assault if there are no signs of physical assault, like bruising.

According to Ronan, if the bill passes the Maryland legislature it will eliminate that oversight. She said that bill has already passed the Maryland House of Delegates.

At the legislative update event, students could win giveaways. Students could also write to their legislators about sexual assault with postcards provided at the event.

On Wednesday, April 5, SGA held a tabling event in West Village Commons from 11 a.m. to 3 p.m. to promote SAPE.

SAPE hosted “Sex in The Dark,” a lights-off event that evening where experts answered students’ anonymous questions about sex and consent. The event ran from 7 to 10 p.m. in the West Village Commons.

On Friday, April 7, the SGA held a tabling event in the Union from 11 a.m. to 3 p.m. where people could write “survivor love letters” with an assortment of post-it-notes and colorful markers. Attendees were encouraged to write anonymous letters in support and in solidarity with survivors of sexual assault “to end the week on a reflective note,” Ronan said.

SGA Deputy Solicitor General Methan Ouattara visited the table write his own letter and emphasized the importance of standing in solidarity with survivors of sexual assault through individual support and spreading awareness about the resources available for survivors.

“I would tell [survivors] that they are not alone,” he said. “There are always people around them to get the support they need.”

In addition to the Week of Action, there will be a “Green Light, Go” event on Burdick Field on April 14 from 1 to 3 p.m. The event, hosted by SAPE, Phi Mu, Alpha Gamma Delta and Zeta Beta Tau, will be a play on the “red light, green light” game and is meant to spark conversation about sex and consent.

Attendees of the “Green Light, Go” event can purchase T-shirts, the proceeds of which will go toward sexual assault prevention.

Ronan said she is proud of ZBT and other men for raising awareness about sexual assault and standing in solidarity. She said the national chapter of ZBT has also become an It’s On Us partner.