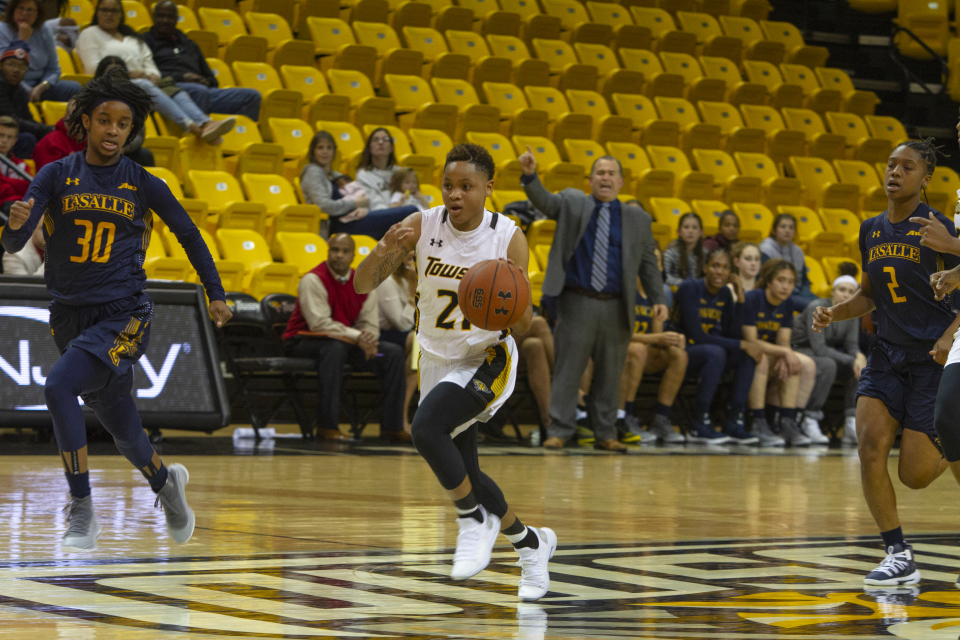 Redshirt sophomore guard Kionna Jeter dribbled to the left wing after snatching a pass away from an unsuspecting La Salle, and recorded her 30th point of the night on a layup to give the Tigers a 79-60 lead early in the third quarter.

“I think we had a hard fought game,” said Head Coach Diane Richardson. “[We] came back in the second half and played Towson basketball. It showed everybody that we’re for real.”

After a sluggish first quarter, Towson’s aggressive 1-2-2 zone trap defense sparked a 16-3 run due to several forced and unforced turnovers. Jeter and Mayo were the biggest benefactors of this run, scoring four and seven points respectively. The Tigers were able to score 33 points off turnovers, making the most out of the 25 times they turned the Explorers over.

“In the second half they realized it’s gotta be team basketball, and not being shy, but talking,” Richardson said. “Once we started talking on defense it made a difference. We had some steals, some defensive stops and it really worked for us.”

Despite the lead growing to 17 midway in the second quarter, La Salle refused to go down. The Explorers cut the lead to as close as five twice after a junior forward Shalina Miller jumper and sophomore forward Jasmine White three-pointer, but the Tigers countered with a 10-2 run to bring their lead back to 54-43.

La Salle’s last chance to truly come back with just a little over nine minutes left in the fourth quarter. The Explorers cut the deficit to nine, but the Tigers slammed the door shut with an 8-0 run in the middle of the fourth quarter. Towson gained its largest lead at 24 points after a Mayo fast-break layup to seal the win.

“[The team had] that warrior mindset, coming out of the halftime,” Richardson said. “They just stepped it up. The confidence kicks in when they got their teammates together.”

Next, Towson looks to take on local foe UMBC Tuesday night at the Retrievers Activities Center. Tipoff is set for 7 p.m.