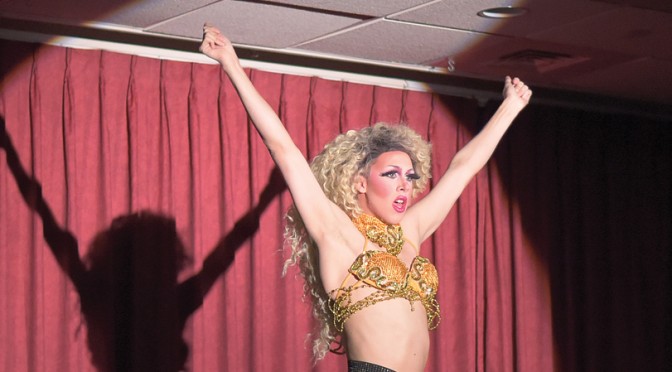 As it inched toward 7 p.m. the audience of the 10th anniversary “In the Life Drag Show” last Thursday was eager and restlessly anticipating international drag superstar, JuJubee’s arrival. As a contestant and runner-up on the second season of RuPaul’s Drag Race, Jujubee has solidified herself as a drag influence.

“I came to support my friend Steph Hunt and see Jujubee. I heard she’s supposed to be amazing in person,” senior Chelsie Hinds said. “This is my first drag show, I can’t wait to tip the performers.”

Besides Jujubee, the “In the Life Drag Show,” also featured other locally or nationally known queens such as Anastasia Belladonna and Cherry Poppins. Towson students and queens William Cox and Smooth and Delicious also took part in the show.

Senior and President of the Queer Student Union, Stephanie Hunt, who performs as William Cox, wanted students to take on a new perspective after attending this year’s drag show.

“I had to listen to a lot of One Direction to pull off this boy band vibe but, I think it paid off,” Hunt said. “I hope everyone had a great time but, I also hope that they leave thinking. Part of the reason I did this was to show that gender and sexual identity are not always as black and white as some may think.”

Seniors Ashlee Reese-Basgier and fiance Bernard Walker performed as the duo “Smooth and Delicious” and were ecstatic to be performing in their second drag show.

“We had so much fun being a part of this last year that we wanted to do it again,” Basgier said.

“We wanted to show support for our friends and everyone else who’s here right now. For everyone who just wants to be happy and be themselves,” Walker said.

The “In the Life Drag Show” strived to create a non-judgmental space where students could openly be themselves and where their allies could support their loved ones.

“We wanted to be a part of a community that shows people they shouldn’t be afraid to be themselves,” Walker said.

Not only is Jujubee an internationally known drag queen, but she also hopes that each drag show she participates in sends a positive and encouraging message to all of her many fans.

“I think drag queens can help men, women and everyone in between to feel empowered and confident,” Jujubee said. “This experience, supporting people, makes me feel so good. It makes me feel whole.”

For anyone aspiring to participate in drag shows, Jujubee stresses the importance of practice and patience.

“I think if you want to do it, just go for it,” Jujubee said. “You don’t ever want your nerves to get a hold of you. My experience on RuPaul’s Drag Race has really helped me to get over those fears and truly be who I want to be.”

Senior and In the Life event coordinator, Terel Lowry, is determined and making the bi-annual drag show an exciting time for all involved.

“The drag show is one of our highlights every year,” Lowry said. “This is always our biggest turn out and we’re always here such amazing things about how well they always go.”

Although In the Life holds auditions for Towson students who wish to participate in the drag show, Lowry also scouts local bars for drag talent.

“We usually look around at Hippo in the city and a few clubs in D.C. We wanted to try and get more Towson students involved though,” Lowry said. “I am so lucky to be a part of something this exciting, especially four years in a row. I want students to understand that it is perfectly fine to be who you want to be and to not be afraid to have some fun in the process.”