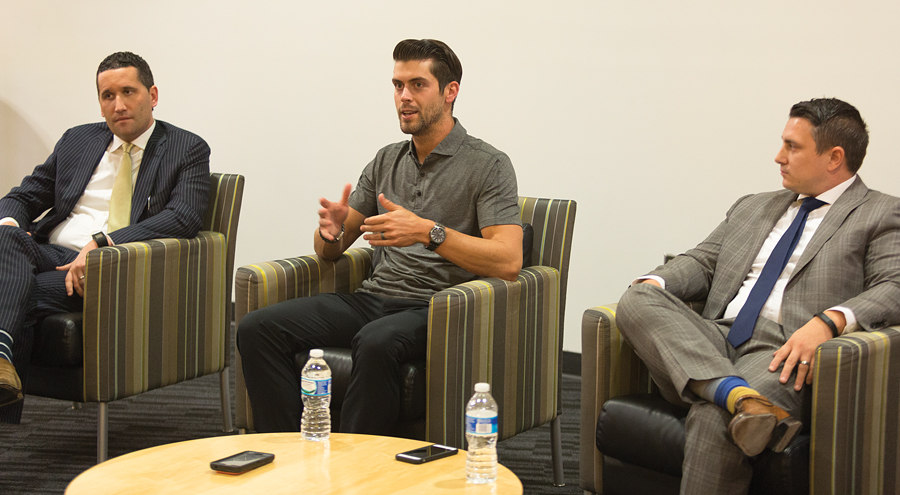 The event gave students a unique opportunity to hear presentations about the importance of career planning and to meet Tucker and future employers.

“I think networking as soon as you get out of college is incredibly important,” Jeff Kirsch of W.B. Mason said. “I think once you’re out there, you want to network with the right people that you think will help you grow and mature.”

Darren Bush, vice president of AXA Advisors also spoke at the event, and preached the importance of networking as a college student.

“Not just networking, it’s great to know people but it’s more beneficial to have relationships,” Bush said. “So really building relationships with the people that you meet, because one of the doors you open down the road may be that person or somebody else.”

Tucker then took the podium to give his advice on career planning.

While the night focused mainly on career planning, Tucker didn’t mind answering questions about his game-winning kick and dance on Sunday against the San Diego Chargers.

“That was a little shout out to Drake with the hotline bling video that’s real popular right now,” Tucker said. “I guess the jury is still out on who did it better, I don’t know if Drake did it well or we both did it poorly, but I’d like to think it was a tribute to Drake. More than anything it was just sweet to get a win.”

After keynote speakers finished at the podium, students concluded the evening by taking part in a meet and greet with Tucker and getting pictures with the National Football League star.

“You get this feeling in the Baltimore community that people genuinely care about each other,” Tucker said. “We have a similar passion for things, football, baseball, crab cakes, Towson Tigers. So being a part of this event and to be with these kids is really cool especially on a local level.”