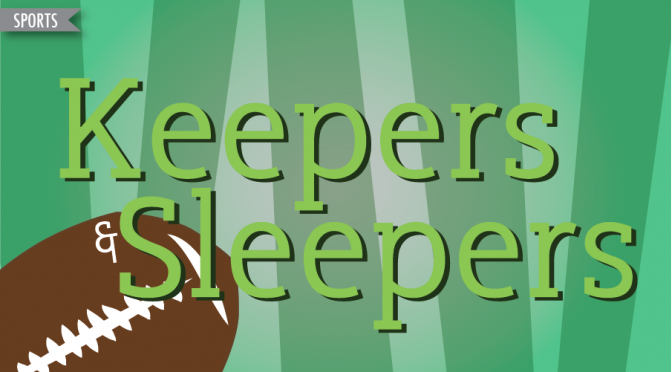 The good would definitely be the fact that DeAngelo Williams exploded this week with the most fantasy points. Hopefully you added him to your fantasy team last week, like I told you to do!

The bad would probably be the results of Doug Martin’s play last week against an already bad Giants defense. Martin was poised for a great Week Nine but only could manage 31 yards on the ground with a fumble.

And for the ugly, I’d like to point out that one of the leading teams in rushing this season only managed to squirt out 17 yards on the ground against one of the worst defenses in the league. Yeah, the Falcons couldn’t get the running game going with their top running back, Devonta Freeman, so they adverted to the air but still found a way to lose to a sorry 49ers team lead by Blaine Gabbert.

Quarterbacks (QBs) in Week Nine shined in the fantasy world, as they have seemed to carry our fantasy teams on their backs. Guys like Cam Newton, Marcus Mariota, Aaron Rodgers and Derek Carr are proving to be a fantasy gold mine as they have been on the rise and show no signs of slowing down.

Running backs (RBs) in Week Nine came out of the woodwork and proved themselves as fantasy treasure off the waiver wire. I told you guys a while ago to look out for those “out of nowhere” players, and guys like DeAngelo Williams, Jeremy Langford, Lamar Miller and Karlos Williams each put up great numbers on the ground in Week Nine and look to continue to do so in future weeks.

Wide Receivers (WRs) in Week Nine carried a lot of the fantasy workload and made their presence known. Guys like Antonio Brown, Michael Crabtree, Sammy Watkins, Cole Beasley and Dez Bryant each had explosive games. Brown had almost 300 yards receiving, Crabtree continues to be consistent, Watkins and Bryant each had their productive comeback games and Cole Beasley proves to be a favorite target in the Cowboys offense.

Tight Ends (TEs) in Week Nine proved to be the favorite red zone targets for some QBs as they were touchdown machines. Guys like Tyler Eifert, Delaine Walker, Richard Rogers and Garrett Celek had at least two touchdowns apiece as Eifert tallied up three.

With the season at its peak, we are starting to see how the rest of the season is going to play out for some teams. The Steelers and Colts look to having to play without their top tier QBs for a while as Big Ben Roethlisberger found his way back on the injury list and the Colts QB, Andrew Luck, with a lacerated kidney (sounds painful in itself) looks to be out 2-6 weeks. With injuries plaguing the league this year teams have to rely on back-ups to maintain their ground and help led their team the rest of the way. Look for these replacement players to have bigger roles in their respected offense, and let’s see how they handle the work load. This should be interesting.

QB- Brian Hoyer (HOU) – Somehow this guy still seems to not be owned in fantasy leagues, I’m pretty sure he’s earned his keep in his offense. With injuries at the QB position, he is a good fill.

QB- Joe Flacco (BAL) – As he’s not owned in many leagues, Flacco could be a great add for this week against a weak defense with the Jaguars. He’s going to be hurting at WR depth with the loss of Steve Smith, but he should still spread the ball around and generate good fantasy points for Week Nine.

RB- James Starks (GB) – Eddie Lacy has been put into the reserve role this week for the Packers offense against the Lions as he is held up by a sore groin. Starks looks to be the lead back against a Lions defense that is averaging 123 defensive rush yards this season.

RB- Matt Jones (WAS) – Jones has been sharing time with Alfred Morris but is outplaying Morris and is receiving majority of the playing time. Against a poor Saints defense, Jones is looking to bounce back from some non-productive weeks.

WR- Brandon LaFell (NE) – Coming off his injury that had him out until Week Seven, LaFell recorded his first 100 plus-yard game. Tom Brady just seems to be unstoppable, so look for LaFell’s catches to increase and his workload to become promising.

WR- Devante Adams (GB) – This could be a sign of the resurgence of Adams, as he was projected to fil Jordy Nelson’s role this season but has been disappointing so far. Last week he recorded 11 catches for 93 yards, look for him to become turn things around.

TE- Jordan Reed (WAS) – It seems that the Redskins are building their offense around their top tier TE (as they should). Reed has seen more targets in the red zone by Kirk Cousins and seems to be averaging a TD a game.

TE- Delanie Walker (TEN) – With the presence that Mariota brings to that offense, he looks to check the ball down more and Walker seems to be that guy there for that. Walker is poised to have more fantasy value down the stretch.

Studs and Duds for Week 9:

Week 10 proves to be promising for the world of fantasy. High scoring is poised to be a story line for this week as the match ups look to predict high offensive stats. Three teams remain perfect in the NFL, the Patriots, Panthers, and Bengals. What if I told you that all these teams may get their first loss of the season? As crazy as it seems, it’s highly capable of happening.

If the Giants prove to upset the Patriots yet again, like they have in past history, then the Titans are on a roll behind Mariota’s return and can upset the Panthers, and the Texans have what it takes to take the Bengals down behind a red hot QB.

We shall see how the plague of injuries will impact the league thus forward. This week should reveal glimpses as to what should be expected the rest of the season. Good luck to all your fantasy teams this week! Don’t forget to join the discussion!