There’s not a lot of comedians that can truly make me laugh, but Kevin Hart manages to get tears and cackles out of me every single time he speaks. Saturday night was no exception.

Hart brought his latest comedy tour, The Irresponsible Tour, to Baltimore Friday night, performing to a reportedly sold out Royal Farms arena. The show, which is his sixth comedic tour, was explained by Hart as being inspired by the recent heat he’s received in the media, due to the mistakes he’s made in his personal life. Hart vaguely addressed this in the beginning of his show, never specifically calling out the “mess-ups” he’s done.

I was lucky enough to get tickets to Saturday night’s performance, having avoided the reviews from my peers who had seen him the night before. The arena was crowded with tons of people, some sharing that they had come from different states just to see Hart and his openers. As a newcomer to seeing live comedy, my excitement only increased as I heard more and more people speak of how great he’s been at live shows in the past.

The show’s openers made for a great start to the night. Writer and actor Joey Wells was the first to open the show, greeting the audience and serving as the emcee for the night. His jokes were funny yet lighthearted, and served as a great way to grasp the large crowd’s attention. Will “Spank” Horton was next to perform, being given a little more time than Wells. His jokes had more grit to them; his comedic approach was a hard, careless mentality (his voice reminded me a lot of DMX, which made his jokes that more hilarious). Horton addressed topics ranging from public school teachers to marriage, all putting humor into bad situations to be in. At this point, I was eased into my seat and ready for Hart to take the stage.

The last opener (and my personal favorite) was comedian Na’im Lynn. Lynn, who was given the longest amount of time of all the openers, was absolutely hilarious. He had a similar comedic style as Wells, however told all of his jokes in the form of relatable stories. He was able to address the sensitivity of society in today’s world, and was able to make jokes surrounding groups of people without playing into stereotypes. Every time I thought he might say something touchy, he surprised me with a completely different response, and I think that is what made his performance so great. Once Lynn finished his performance, the crowd buzzed with noise and excitement as Wells came back to the stage to introduce the star of the show. As seconds passed, I readied myself for what was about to be comedic gold, up close and personal.

Before Hart was introduced, Wells did have to address an elephant in the room – prior to the show’s start, there were signs plastered everywhere saying that no cell phones were allowed to be on or in sight. Guards had been pacing back and forth each section, reporting and escorting people out who did not follow the strict rule. Wells had reported that at the time before Hart’s start, more than 50 people had been kicked out of the show. Although the measures seemed extreme, Wells lightened the mood by making jokes about people getting kicked out, and advised the crowd to abide by the rule for the comedians’ sake. He even poked fun at how serious some of the guards were, allowing the audience members to take in the rule with a little more ease. After Wells last warning, it was time for the main event.

The stage’s video screen, in the shape of a rectangular box, lowered to the stage, as an introductory video played. The video showcased all of Hart’s accomplishments, from addressing his popular past tours to the movies he’s been featured in since his career took off. As the video continued, I was worried it was going to just be a promotional video of Hart, but then it addressed the fact that despite all of his success, he still managed to screw up and make mistakes, bringing the audience to the central point of the night’s show. As the video neared its end, the sound of heartbeats blasted throughout the arena, and the screen began to rise alongside the volume of the crowd. Hart was found standing central stage, and the amount of energy that burst throughout the arena was electrifying.

Hart’s performance, which lasted roughly 90 minutes, was fresh and unique, yet still told in his well-known relatable style. He spoke of his children, relationships, and all the trouble he’s gotten into in the media, each subject being told in the form of hilarious anecdotes. During his Saturday night performance, there was even a moment in which he shed a few tears, telling the crowd to “let me get it out” as he struggled to finish acting out a joke due to all of the laughter it was causing.

Hart’s show was an absolute blast to attend. At the end of the show, he allowed everyone to take out their phones, and he spoke to Baltimore about how much he appreciated the area and all the support he’s gotten from us throughout the years. As the crowd cleared out, the energy never left, and by the time I got to my car, I was more than satisfied with the way I had spent my night.

Kevin Hart may be an irresponsible “grown little man,” but he’s seriously funny. 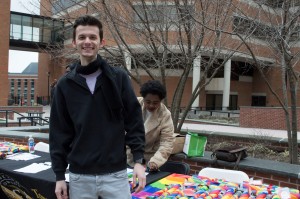