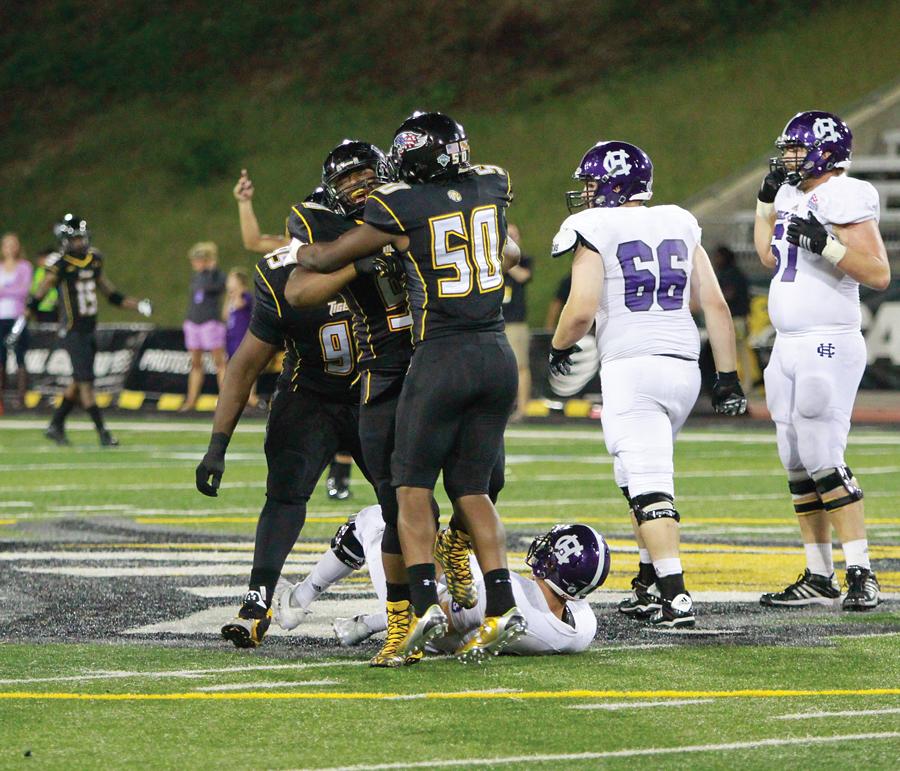 The Tigers come off their first loss since Sept. 8 against Wake Forest.

Towson scored first with a field goal by junior kicker Aiden O’Neill from 27 yards. The Blue Hens lined up to punt, but a high snap went over the redshirt junior punter Nick Pritchard’s head and resulted in a safety. O’Neill kicked two more field goals in the second quarter, including a career best 50 yard attempt as time expired. Redshirt junior quarterback Tom Flacco found sophomore wide receiver Jabari Allen for a touchdown in the closing seconds of the first half to give Towson a 18-6 lead at halftime. The Blue Hens started with the ball in the second half, and senior wide receiver Vinny Papale caught a 49 yard pass to set up a score by senior running back Kani Kane from a yard out. Delaware lined up to punt, but another high snap went over Pritchard and was recovered by the Tigers at the seven setting up first and goal. Towson took advantage of this mistake, as Flacco found Jabari Allen in the left corner of the endzone for an acrobatic touchdown.

The Blue Hens drove 64 yards and Papale scored from 15 yards out on a pass from Kehoe. The Tigers could not move the ball, and the Blue Hens drove down and  redshirt junior quarterback Pat Kehoe found redshirt senior wide receiver Joe Walker wide open for a touchdown. After an interception to start the fourth quarter by redshirt junior linebacker Keon Paye, the Blue Hens got the ball back on a Flacco interception. Two plays later Kane rushed for his second score of the game, and Delaware took their first lead of the game. Towson responded with a 70 yard drive ending in a 11 yard run by redshirt junior running back Shane Simpson for the score. The Blue Hens finished the game on a 36 yard drive for a touchdown by Papale. After a failed fourth down conversion by the Tigers, their five game win streak came to an end as the Blue Hens won 40-36. Head Coach Rob Ambrose understands the goal of Saturday’s game, and that it will be all business. “There’s a job to be done. Eleven guys gotta go beat eleven guys.”

Towson now returns home to Johnny Unitas Stadium to face the Black Bears of Maine. The Black Bears are coming off a 28-9 win over Albany. Maine got out to a 14-0 lead in the first quarter, after sophomore quarterback Chris Ferguson found junior wide receiver Earnest Edwards for a touchdown and ran in from a yard out. With less than two minutes until halftime, the Black Bears added to their lead as redshirt freshman running back Ramon Jefferson punched it in from six yards out. The third quarter was not nearly as intense, as only three points were scored by either team on a 38 yard field goal by Albany midway through. Early in the fourth quarter Albany scored a touchdown, but failed to pick up the two point conversion making the score 21-9 Maine. Senior tight end Julian Dunn responded with a touchdown to put Maine up 28-9 and seal the game. The Black Bears are now 4-1 in CAA play, identical to Towson and 5-3 overall. Ferguson threw for 244 yards and touchdown on 21 completions. Jefferson rushed for 95 yards and a score, averaging 4.9 yards a carry. Edwards caught six passes for 114 yards and a touchdown.

The Black Bears finished with 360 total yards of offense, 249 passing and 111 rushing. On defense sophomore linebacker Deshawn Stevens with eight tackles, one of them for a loss and a sack. Redshirt senior defensive back Darrius Hart and junior defensive lineman Kayon Whitaker contributed seven tackles, and Whitaker also had three sacks. The defense came into the Albany game with the top rushing defense in the FCS, only allowing 51 rushing yards against the Great Danes. Coach Ambrose understands the challenge ahead, but understands the team needs to focus more on themselves than their opponent. “Slowly but surely we stopped caring about who we play. We play in a league where people are just good. After Delaware will be good. It’s good on good from here on out.”

The Tigers look to bounce back against Maine and separate their three way tie for first in the CAA. Kickoff from Johnny Unitas Stadium on November 3rd is at 4 p.m.