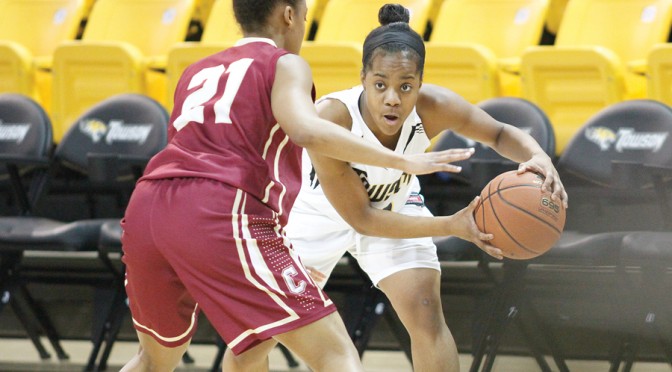 Towson dug itself out of an 18-point hole, but came up short against Drexel in a 50-45 loss on Sunday.

“We were able to fight and that’s something that I’ve always loved about this squad,” Head Coach Niki Reid Geckeler said. “I’ve always been proud of the fact they they keep fighting.”

However, Towson came alive in the second half when senior guard Ciara Webb scored five straight points out of halftime and cut the lead to 13 points.

The Dragons rallied and built their lead back to 44-28 after a three-pointer with less than eight minutes left in the game.

The Tigers fought back and cut the lead to six points after back-to-back three-pointers from junior guard Dominique Johnson and Webb a few minutes later. The Dragons turned the ball over their next possession and Webb hit another three-pointer, which gave the Dragons just a three-point lead with less than two minutes in the game.

Freshman guard Shanea Butler made two free throws, which brought the Tigers within one point, but Dragons’ sophomore Sarah Curran hit a jumper with 16 seconds left.

Towson had a chance to tie the game with its last possession, but Webb turned the ball over and Drexel’s senior forward Jamilia Thompson made a pair of free throws tdhat sealed the game.

“Going into the end of the regular season, we just have to keep grinding it out,” Geckeler said. “A big part of that is staying focused.”

After the game, the Tigers will shift focus to the upcoming CAA Tournament, but Geckeler said the team’s mentality will stay the same.

“The mindset doesn’t change,” Geckeler said. “I’ve always said that this is my favorite time of the season, when you get into March. Once this last regular season game ends, we’ll know what our position is in the tournament and we’ll be play hard.”