Junior Lauren Coleman set a new school record of 51-9.75 in the shot put at the Penn State Tune-Up at the Ashenfelter III Indoor Track in University Park, Pennsylvania, Saturday.

Coleman broke her previously held school record of 51-3, which she set earlier this season at the Navy Lid Lifter on Dec. 5.

“She’s come a long way,” Head Coach Mike Jackson said. “She’s a great athlete, and she has a great coach, and they work well together and that’s why we see great products with them.”

Three Tigers placed in the top-three in the weight throw event. Junior Taylor Giles had a first place throw of 56-6, which was followed by Coleman’s second-place toss of 53-3.75. Safonova placed third with a throw of 54-4.5.

“They’ve been working for this all year long,” Jackson said. “It’s just showing in their performances, so I know they expect a lot from themselves.”

Jones-Alleyne and Penda finished in the top two spots of the 60-meter hurdles finals, while Nguetta and McAdam placed fifth and sixth, respectively.

Juniors Jaina McLean and Rachel Laryea both qualified for the finals for the 60 meter dash event. McLean placed first, setting a new personal-best time of 7.76 seconds, and Laryea finished seventh.

The team of Famularo, freshman Ivonna Hoskins, sophomore T’Reyah Johnson and junior Liz Reid finished in 3:55.28 to finish first in the 4×400 meter relay.

Reid also set a personal best in the 200-meters with a second-place time of 24.76 seconds. Reid was just 0.03 seconds behind first-place finisher McKenna Smith of West Virginia.

“It was just good to see everyone being able to compete together,” Jackson said. “It was a great way to finish the indoor season as an overall team and then start looking towards the outdoor.  I think we’re going to start coming together, ready to do something great.”

Towson will compete Saturday at the Fastrack Last Chance Invitational in Staten Island, New York, before the start of the ECAC’s on Friday, March 2.

“We’ll probably have about five to 10 athletes competing there,” Jackson said. “Half of them will be distance runners. They’re really starting to come around with their performances, so our new coach, Coach [Henry] Phelan, will be bringing them up there. I’ll have a handful of runners and jumpers up there, but we just need a little bit more work, so I think we’ll have some more personal bests, season bests and [will] look forward to the ECAC championships.” 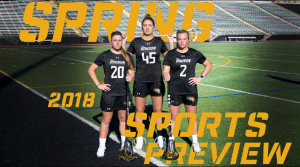