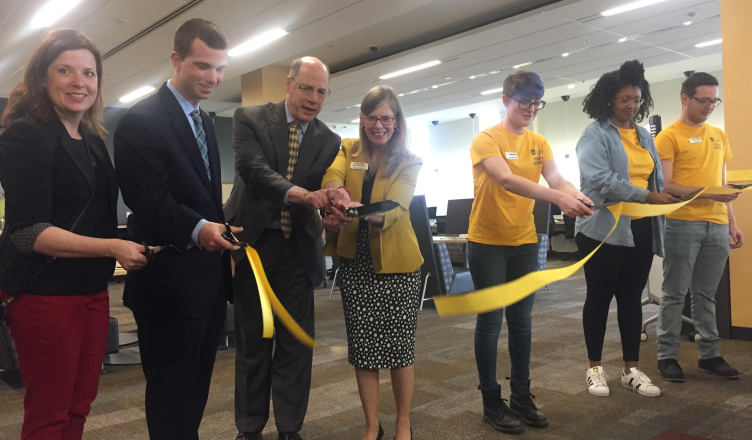 Just in time for finals, students can now study around the clock at Cook Library’s new 24/7 study room, which opened April 26.

Starting in 2006, Dean of University Libraries Deborah Nolan and her colleagues worked continuously for a space in which students could work at any time. Success came in stages: first by expanding weeknight hours until 2 a.m., then by staying open 24/7 during finals week, to finally having a space that could be open all of the time for students to work.

“The 21st Century library, with a central focus on student learning, requires learning spaces to support differing learning styles and discovery methods,” Nolan said. “Our 24/7 space offers spaces and furnishings for quiet individual work and for conversational small group work, with and without technology.”

Provost and Executive Vice President of Academic Affairs Timothy Chandler spoke about how libraries have become more technologically accessible since his days of studying, when books were students’ primary resource for information.

“We’re living in a 24/7 world, and this part of the library is an attempt to enable students to live in that kind of world,” Chandler said. “I believe this is part of the 21st Century education that all students need. They’re places where they can work individually. They can work in groups. They can have access to the materials they need anytime of the day or night.”

The study room replaces the former office spaces that were located behind the newly renovated Starbucks on the main floor of the library. The room includes large work tables for group work and futuristic, private Brody WorkLounge chairs by Steelcase, designed to maximize productivity.

Along with space to work, there is also a row of Mac desktops on one side of the room. A bar-style tabletop, outfitted with electrical outlets for students working with personal laptops, lines another side. The room also has its own portable white boards.

“People like to work differently so we balanced it out,” facilities planner Kerry Spence said.  “We’re offering a space where you can use the computers that have software that might not be on your own laptop, but we also provide a place where you can just plug in your laptop and work.”

The room is made to be primarily self-sustaining, with little personnel needed. After hours, students get into the main entrance of the library by swiping their OneCard, and the only room open to students will be the study room.

Following the ribbon cutting, students, staff and visitors were invited to enjoy drinks and refreshments, as well as partake in some of the many activities set out by three student library leaders part of the Albert S. Cook Library Leadership Institute for Students, known as A-LIST students. The activities included recycling old books to make book art, an origami station and a photo station.

“Our A-LIST students are part of a mentorship program, they’re in a mentorship position so they help students with research,” Librarian for Outreach and Student Engagement Eden Parks said. “The A-LIST students help with everything from events we have here at the library to orientation and the Black and Gold fair.”

“For this 24/7 opening, we sat down with Eden, did some brainstorming of what different activities we should have, what kind of giveaways we should have, basically we figured out what would draw in students,” A-LIST student Ash Baker said. “So the book art was my idea. It was something I did in high school art classes. We’re taking books that were just going to get thrown out and turning them into art.”