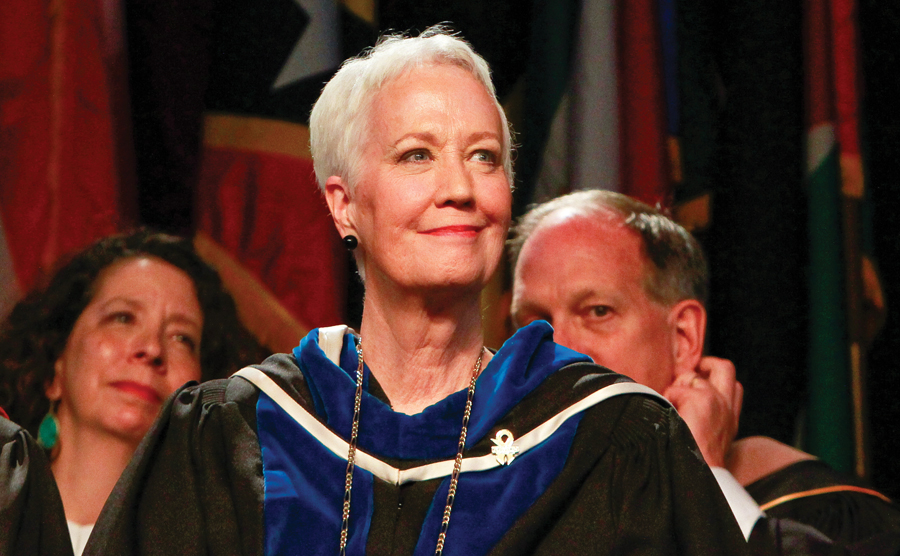 Towson alum and former SGA president Matt Sikorski remembers the first time he met President Maravene Loeschke. It was at a fall 2011 rally where Loeschke, a former Towson student, professor, chair and dean, was welcomed back as TU’s future 13th president before she assumed the role in January 2012.

Sikorski, who served as SGA president from May 2011 until his graduation in 2012, said that at first glance she knew exactly who he was.

“She came over and gave me a hug and told me how excited she was to be back on campus,” Sikorski said. “My very first ever interaction with Maravene Loeschke was just this woman who, as soon as she walked in the room, everyone just turned to her and was energetic.”

This moment marked not only the start of Sikorski’s relationship with Loeschke, but also the brief reunion of Loeschke and Towson University.

On Thursday, June 25, the 68-year-old Loeschke died at Gilchrist Hospice Care in Towson of complications from her battle with cancer, which was diagnosed in spring 2014.

At the beginning of the 2014-2015 academic year, Loeschke had announced that she would be taking a leave of absence, followed by an announcement effective December 19 that she was officially resigning due to her health.

“I can’t say enough how lucky I really was, the access that I got to her,” Sikorski said.

“Our hearts are broken. Perhaps her greatest gifts to Towson were her warmth and her generosity,” Chandler said in the email. “In so many ways she was Towson.”

In the days following her passing, students, faculty, administrators, community leaders and friends of Loeschke have used social media and news outlets to express their thoughts, regards and memories about her life and legacy.

Loeschke was known for often saying, “people ask me how many children I have – and I tell them 22,500.”

The love she had for every student was why Sikorski said many valued her so highly as Towson’s president.

The care and compassion she had for others extended beyond the confines of Towson as well.

While serving as president of Mansfield University in Pennsylvania she established the “I’ll Leave the Light On For You” initiative, which allowed any student to visit her home on campus anytime her porch light was left on.

Sikorski said that Loeschke was always visiting various student groups on campus unannounced just to see how they were doing. Current SGA President, Kurt Anderson, said that he remembers always seeing her in the University Union.

“She’d always talk to people, she’d always give people hugs,” Anderson said. “Every time I’d see her, she’d give me a hug.”

Anderson said that Loeschke went out of her way to ensure that people knew she cared, and that doing so unified much of Towson’s campus. He added that even many of those who disagreed with her on certain topics still respected her, and would return her hugs when they saw her.

Both Anderson and Sikorski said that it was difficult to put who Loeschke was into words, and that it is only through telling stories about her that one can begin to explain her impact on the University and its students.

In recognition of her commitment to the University, The Board of Regents of the University System of Maryland named her President Emerita earlier this month in addition to the Audrey Herman Award from Spotlighters Theatre she was awarded on June 13 for her work in arts and the theatre.

Sikorski said that Loeschke was always asking students how they planned to use their education to save the world, and said that whatever answer she got in response, she was always interested and eager to help them.

“She would always ask those follow up questions to really learn about people, but also to get them to think more about what they were talking about,” Sikorski said.

Following her passing, a detailed memorial of her life and legacy was posted on the Towson University website, and according to the email from Chandler, details regarding an on-campus memorial service will be released when available.