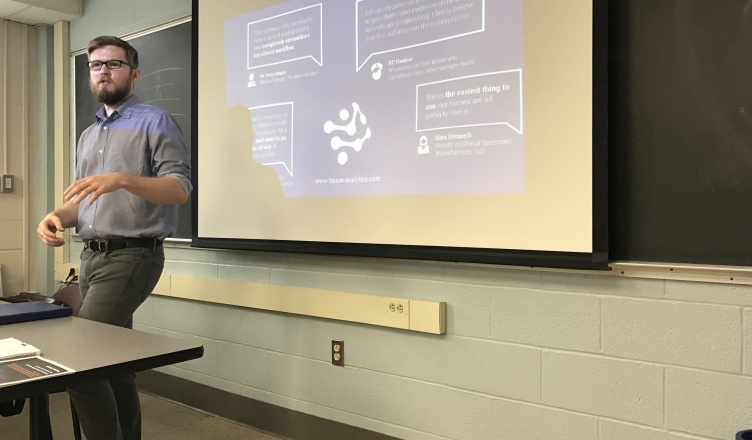 Reality TV shows and other media advocate that the key to receiving funding for a startup company is “the pitch” to investors. Kevin Keenahan, chief executive officer of Tissue Analytics, Inc., has a different approach.

“I’ve never actually pitched to an investor and gotten money,” Keenahan said. “Most of my investors right now, we’ve only had a simple conversation.”

Keenahan spoke to campus March 28 as part of the Entrepreneurship Unplugged speaker series, sponsored by the Student Launch Pad and entrepreneurship minor.

Keenahan’s startup, an artificial intelligence system that analyzes long-term wounds and helps doctors prescribe accurate care, is lucky to have such an ease in funding, which comes from what the business world calls “long tail investing.”

The term, coined by former WIRED Editor-in-Chief Chris Anderson in 2004, describes investing in businesses that are off the mainstream market. While big name businesses dominate a large portion of the market, smaller, more niche businesses populate a small section of the same market, or the “long tail” end.

Anderson theorized that since many consumers are moving away from large businesses in favor of smaller, niche ones, that these businesses could rival the big name ones in terms of growth and sales.

It also gives entrepreneurs who find a viable business in the “long tail” an opportunity to monopolize the market without fighting off competing startups.

Wound care is a relatively small market, but by using an AI system, Keenahan and Tissue Analytics, Inc. can eliminate the old system of using rulers to measure wound healing and replace it with a smartphone camera.

“There’s a very nasty part of medicine that many of you probably haven’t heard of,” Keenahan said.

“[Most entrepreneurs] don’t want to talk about the nastiness of medicine,” said Podsednik.  “It’s nice to know someone is going into that.”

Keenahan also answered questions on the process from an idea to a successful business, and how to pitch to investors who will give you money.

He stressed research as a key tip in order to know what investors are interested in financing, and making sure business ideas can expand.

“Investors all want to know what the next big thing is,” said Keenahan.  “And they all want to invest in platforms.”

“He had good ideas to work with, rather than just a presentation,” Gant said.