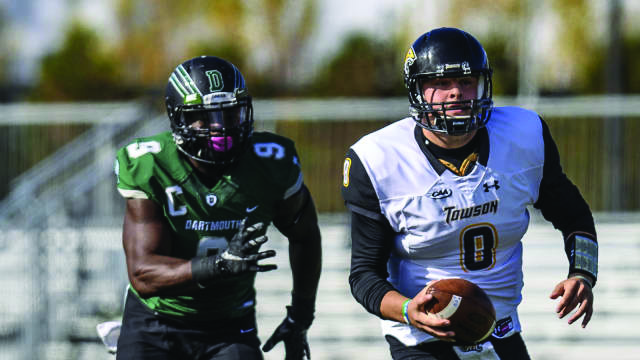 Towson dropped its final non-conference game of the season to Dartmouth 20-17 Saturday, despite recording 470 total yards of offense.

The Tigers (1-5, 0-3 CAA) took a 7-0 lead over the Big Green (3-2, 0-2 IVY) in the middle of the first quarter, when redshirt sophomore quarterback Ellis Knudson found senior wide receiver Christian Summers for a 15-yard touchdown pass.

Both teams played tight defense in the first quarter, but Dartmouth put through a field goal with under three minutes left to make it a 7-3 game going into the second quarter.

Midway through the second quarter, the Big Green scored their first touchdown of the game. The Big Green constructed a 10-play, 57-yard drive that was capped off with a four-yard touchdown run from sophomore running back Vito Penza, to take a 10-7 lead.

Dartmouth extended its lead over Towson later in the second quarter with its second field goal of the afternoon, making it a 13-7 game going into halftime.

In the second half, the Tigers made it a three-point game when freshman kicker Aidan O’Neill put through a 27-yard field goal attempt.

However, the Big Green extended their lead to 20-10 on the ensuing drive thanks to a trick play, where senior running back Abrm McQuarters found sophomore wide receiver Drew Hunnicutt for a 23-yard touchdown pass.

Towson cut the Dartmouth lead to three points with under two minutes remaining in the third quarter when freshman running back Deshaun Wethington capped off a three-play, 11-yard drive with a one-yard rushing touchdown.

“Without watching the film, the first one I thought was us not getting it done,” Ambrose said. “The second one you knew you were gambling to begin with and it was a matter of the higher percentage for a chance.”

Towson will look to snap a four-game losing streak and pick up its first conference victory of the season Saturday at Johnny Unitas Stadium against rival New Hampshire. Kickoff is scheduled for 3:30 p.m.