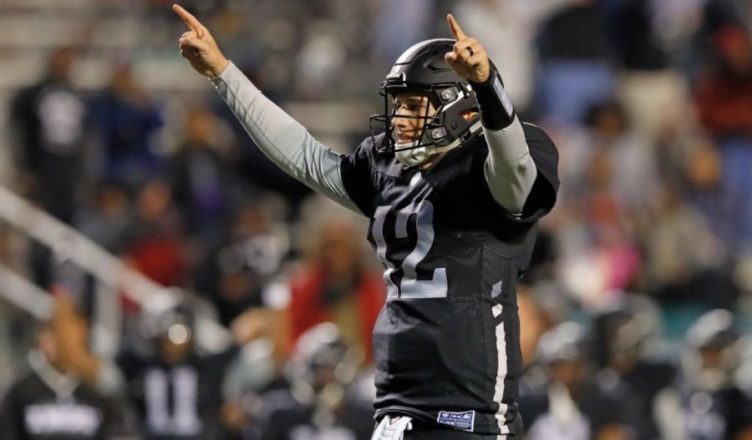 photo courtesy of The East Texan

It can be argued that the hardest position to play in any sport is quarterback. It takes intelligence, toughness, natural talent and above all else, years of practice. I’ll bet even the most rabid of NFL fans can’t name one professional quarterback who didn’t play the position in high school. I can.

Luis Francisco Perez, from Chula Vista, California, took a slightly different route to the pros. During his freshman year of high school, he showed up as a quarterback, but Perez was pegged as a wide receiver by his coaches. That year, he said, “little by little the love for football went away.” His sophomore year, he turned to a different sport: bowling.

Perez wasn’t just another kid who liked bowling. He was good. Since starting the sport as a sophomore in high school, he’s bowled 12 perfect games. But through it all, Perez just couldn’t shake his dream of being a quarterback in the NFL.

After playing virtually no football in high school, he enrolled at Southwestern College, a junior college in San Diego, and walked onto the football team. Now, I could tell you that Perez should up and was immediately named starter, but then this wouldn’t be as crazy of a story. When he showed up, Perez was the ninth string quarterback. Who has nine quarterbacks on their roster? Apparently, Southwestern College. Throughout that summer, several players switched positions and transferred out, and somehow, Perez ended up being 4th string, and eventually won the backup role. Then, mid-season, Perez’s shot come in the way of an injury to their starter. He started for three games, then promptly broke his leg.

The next season, Perez and another quarterback shared the starting quarterback role for Southwestern College, and Perez managed to create a little buzz around his name. Perez got called by Texas A&M-Commerce, a Division II school in the Texas A&M University system. He immediately took the offer and transferred.

His first season at A&M Commerce, Perez threw for 3,326 yards, 32 touchdowns and five interceptions in 12 games. He was named as an honorary mention All-American and led the team to their first playoff victory since 1991. The next season, he showed everyone that he was just warming up. As a senior, he threw for 5,001 yards, 46 touchdowns and 11 interceptions. The Lions won their first national title since 1972 with Perez at the helm. Perez won the Harlon Hill Trophy, which is the Division II equivalent to the Heisman.

With all that Perez has achieved, going from not playing any varsity football in high school, becoming a bowler, his dream was not a reality until he was signed by the Los Angeles Rams in May 2018 after going undrafted. Perez did see action for the Rams in their final preseason game, but was cut by the team, signed to their practice squad and then later released. He currently plays for a new start up league, the Alliance of American Football, on the Birmingham Iron, and is making a name for himself as he currently has the third most passing yards in the league.