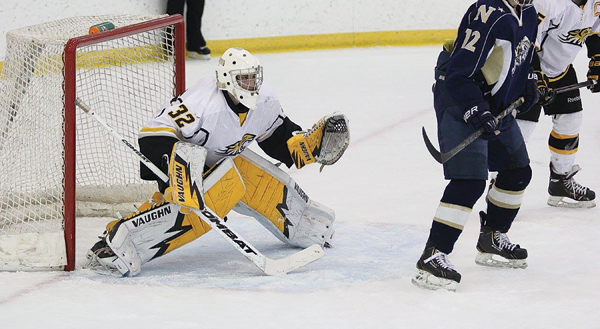 When the final horn sounded in last year’s Eastern Collegiate Hockey Association Championship game, Towson skated off of the ice defeated by the Drexel Dragons and finished in second place.

“The loss was tough, especially coming off of an emotional win over Villanova in the semi-finals,” team president Ryan Buccigrossi said. “It is always tough when the year ends because the seniors realize it is their last competitive game.”

This year marks a new chapter for the team and a season that they hope will be even more successful than the last.

“We have been working hard every day in practice to try to make another run in the playoffs,” senior Matt McGuire said. “Our season is very long. We start in August and playoffs are not until February, so we try to stay motivated and push each other to get better every day.”

The Tigers are fresh off of their 12th win of the season after earning a come from behind victory over the Temple Owls Saturday at Flyers Skate Zone North East.

“We did not know much about Temple going into the game because they were a division two school last year,” Buccigrossi said. “However, they were big and fast which made them tough to defend against. But we are on a roll right now and despite being down 2-0 in the first we showed no panic and were able to come back and pull out a victory.”

Towson’s win over Temple was just one of many tests that the team has endured this year.

The Tigers next game will be against the Villanova Wildcats, Friday at Hatfield Ice Arena in Colmar, Pennsylvania.

“Villanova has been a very good offensive team in the years past,” senior Niko Vonakis said. “They always start the game very quickly and aggressively, so we expect to see them take a lot of shots and put pressure on our defensemen and goalie early on.”

Towson, however, feels that it is up to the challenge because of the team’s chemistry both on and off of the ice.

“The bond that we share with our team is something beyond special,” McGuire said. “We like to think of each other as twenty-five brothers always having each other’s back. Our team is always consistently hanging out, taking classes together and going out when time permits. Our chemistry comes from long bus rides and spending countless hours together every week.”

Although the Tigers are hungry to down the Wildcats Friday, the team is looking at a much bigger goal for this season.

“Our goals this year are to finish at the top of our division in points, earn a spot in the ACHA National Tournament and return to the ECHA Championship and reclaim our title,” Vonakis said. “We know we are more than capable of achieving all of these goals, so not achieving all three would be a failure.”