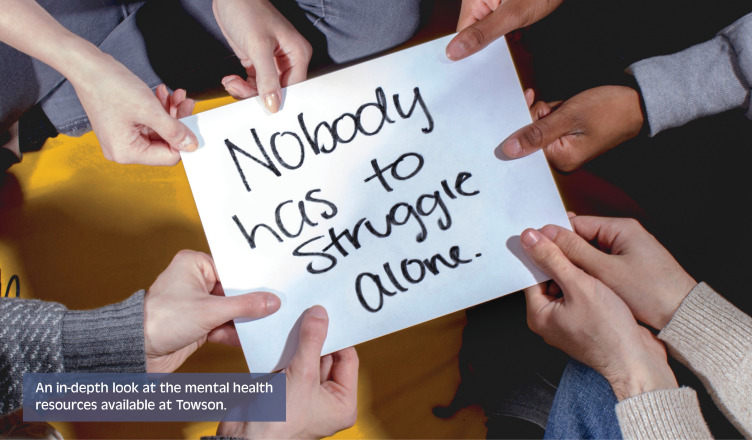 Over the past month, The Towerlight talked with members of the Towson University community about the mental health resources available at Towson, and about students’ own experiences with mental health care. We also sent out a survey to students online regarding wait times for mental health treatment. The results of the survey are not meant to be comprehensive but were gathered from those students who responded in time for our print deadline.

As Towson University grows, so does the demand for mental health care among students.

Counseling Center Associate Director Mollie Herman said the center, which is located at Ward and West, northeast of the Liberal Arts building, sees everything from adjustment issues and roommate conflicts to suicidal thoughts and behaviors, non-suicidal self-injury, eating disorders, and survival of sexual assault.

“There’s almost nothing that you could probably think of that we haven’t at some point talked to somebody who was dealing with that issue,” Herman said.

Steph Lietzau is the secretary of Active Minds, a mental health advocacy organization at Towson. As college students juggle classes, work schedules, other commitments, and their personal growth as young adults, Lietzau said anxiety, depression and other mental illnesses add to the challenges that students face.

“I think the most prevalent one, nationwide but especially on college campuses, is anxiety just because we’re inside such a stressful time right now,” she said. “Our brain isn’t fully developed yet. That doesn’t happen until you’re 25. We’re still going through a bunch of changes, especially moving to a new college is really scary and a big change.”

Herman said the Center has seen an increase in students coming in to meet with clinicians.

However, both Herman and TU President Kim Schatzel theorize that the increase in students seeking mental health treatment has not been caused solely by the growth of the campus.

“It’s not just the size of the campus that’s impacting that,” Schatzel said. “Over the last probably [five to ten years], the stigma that was attached to behavioral health very fortunately is being removed. Folks that would not have necessarily sought support or treatment are now doing so. The number of incidents that we have of students seeking out counseling is on the rise and we’re really pleased to be able to offer that.”

Despite the uptick in traffic coming into the Counseling Center, Herman said the center continues to prioritize quick access to mental health treatment.

Herman said the average wait time for a student to see a clinician was 3.73 days, and that 90 percent of students were seen by a clinician in a week or less.

Out of the The Towerlight’s survey respondents, 75.9 percent said they have not had to cancel an appointment with a mental health professional due to wait time.

Lietzau said Active Minds is built on three main pillars: education, advocacy, and reduction of the stigma around mental health.

“Reducing the stigma is probably the biggest thing to do right now just because it’s so bad around so many different mental illnesses,” Lietzau said. “We’re all just really passionate about that because for a lot of us it’s very personal and hits home.”

While reduction in stigma has perhaps encouraged more people to seek treatment, Active Minds member Abra Roberts said that the cost of mental health care is still an obstacle for many people.

“Insurance and finances make it really really hard for some people to seek out help because therapy is really expensive … so I think they should make it more affordable for people to go [to mental health professionals] or at least give them services to go through to reach those services,” said Roberts, a senior psychology major.

Herman said there is no fee for sessions at the Counseling Center, with the exception of some of the mandated drug and alcohol treatment services.

Students seeking counseling meet with a clinician for a “intake meeting,” or initial appointment, and work with that clinician to determine a plan for further treatment.

Herman emphasized that the Counseling Center will not turn away any student in crisis.

During fiscal year 2017, 1,770 unique clients received clinical services at the Counseling Center; the center had a total of 7,597 clinical appointments during that same period, according to Herman.

Herman said that Counseling Center clinicians’ clinical work with students constitutes about 60-70 percent of how those clinicians spend their time, depending on time of year.

In addition to the clinical appointments, clinicians made 3,500 clinically significant contacts – such as telephone consultations and inquiries by people who are concerned about the welfare of others — during fiscal year 2017. Between clinical sessions and consultations, the Counseling Center served nearly 2,000 unique individuals, according to Herman.

The Counseling Center has 16 generalist clinicians and two clinicians who focus on substance abuse concerns. The center also has 20 hours per week of psychiatry consultation, Herman said.

While Herman said the Counseling Center tries to serve as many students in need of counseling as possible, she acknowledged that the center does not have the resources to be everywhere all at once. That’s where resources like the center’s mental health training program, Kognito, come in.

Kognito is a self-directed module that teaches students, faculty and staff members how to respond to students who might be in crisis or students they’re concerned about, and to refer those individuals to the Counseling Center to receive the care they need.

Lietzau is one of the Healthy Minds Peer Educators. She said she sees a particular value in students being able to speak with a peer about mental health.

“I feel like especially for youth and people our age, they might listen to other people of our age more than adults…. We’re trying to relate to people our own age because that helps people a lot sometimes if they can relate to somebody who’s offering them help,” she said.

Lietzau said she appreciates the efforts by the Counseling Center and student groups to spread mental health awareness to campus.

“Healthy Minds specifically focuses on mental disorders and everything, and Active Minds as well; just making it a place where nobody has to struggle alone…. That’s one thing we always say: nobody should suffer in silence. I think that Towson is really open with that and doesn’t really shame it all or anything,” she said.

Roberts said she has found solace in being able to put a name to her bipolar disorder.

“I want other people to be able to get that help because I know it’s not easy for a lot people because they don’t want to admit something’s wrong…. Being able to say ‘hey, I’m a regular person and I happen to be schizophrenic or I happen to be bipolar.’ … We’re real people. It’s everybody you walk by. Anybody can have it, and it doesn’t mean it’s wrong.”

Despite the stresses of college life, Lietzau said she has bonded over mental health with the members of Healthy Minds and Active Minds.

“We all help each other,” Lietzau said. “It can be like a therapy session just because the majority of us either suffer from some sort of mental health issue or they know somebody that has one or are just really passionate about it…. That really brings us all together and doing all the work we do with events, it’s a really good feeling.”