Towson Head Coach Rob Ambrose and his staff unveiled an 18- 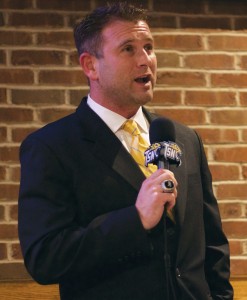 player recruiting class, and Towson’s 2015 schedule, at a Signing Day party held at Charles Village Pub and Patio on Wednesday.

“There will be players to be named later,” Ambrose said. “But per NCAA rules, this is all we can talk about tonight.”

Headlining the class is quarterback Kevin Olsen, a former Under Armour All-American and four-star recruit out of Wayne Hills High School in New Jersey that has transferred in from the University of Miami and is already enrolled in classes at Towson.

Olsen left Miami amid off-field issues, including being charged with DUI and possession of a fake or stolen identification that resulted in multiple suspensions from the football team. It is something that the Ambrose said he believes is behind him.

“Let’s just say, [Miami] wasn’t nearly as good of a fit as what Kevin has found Towson to be for him,” Ambrose said. “The family is in. The kid is in. And we are lucky to have him.”

Ambrose did not say if Olsen, who has three years of eligibility remaining, would be the Tiger’s starter in the upcoming season, but rather spoke to how the offense will look a bit different in 2015.

“We have some quarterbacks in the stable,” Ambrose said. “There is a very high percentage that we will play three quarterbacks next year in a game.”

Another player transferring in from a Football Bowl Subdivison school is wide receiver Richy Anderson, who comes to Towson from Penn State. Like Olsen, Anderson is already taking classes at Towson and will push to make an impact next year.

“He is more physical than his [5-foot-11, 175 pounds] stature will lead you to believe,” Offensive Coordinator Jared Ambrose said. “He’s got good ball skills, and he is definitely a play-maker.”

“They are more than able and willing to take on the tradition that comes along with being a Towson Tiger offensive lineman,” Donatelli said.

On the defensive side of the line, Towson has added Quinn Cox from Yorktown High School in Virginia. Cox posted 17.5 sacks as a senior and was named second-team all-state. Towson Defensive Line coach Konstantino Kosmakos said that Cox “has a knack for getting the quarterback.”

Adding versatility to the roster will be Brent Richardson from Glenelg High School. Recruiting coordinator Reno Ferri said that Richardson will be either a wide receiver or a safety for the Tigers after playing quarterback his senior year at Glenelg.

In a similar situation will be Shane Simpson from Easton High School in Pennsylvania where he was first-team all-state. He scored 41 touchdowns as a senior and was a state finalist in the 100-meter dash last year. He is listed as a running back, but could also return punts and kicks.

The linebacking corps added four players in this year’s class. It is made up of Diondre Wallace from Arundel High School, Chris Tedder from Varina High School in Virginia, D’Angelo Niler, a transfer from ASA Junior College, and Malik Tyne from the John Carrol School.

Wallace was a four-year starter at Arundel and was named first-team all-state and all-metro as a senior.

Tedder had 92 tackles and five sacks last year at Varina and brings what running backs coach Dassin Blackwell called a “silent assassin” approach to the game of football.

Niler will be a junior when the Tigers take the field in the fall, leaving him with two years of eligibility. He compiled 93 tackles and 11 sacks in his time at ASA.

Tyne will be coming to Towson after just one year of playing organized football. He is a basketball and just recently picked up football after coming to the United States from Canada a few years ago. As expected, he is raw, but defensive coordinator Matt Hachmann said he believes he is “one of [Towson’s] faster recruits.”

The secondary got four signees of its own; two safeties and two cornerbacks.

Trey Lee is a safety from Thomas Stone High School, where he pulled double duty as the team’s quarterback as well.

His fellow safety is Isaiah Ross from Piscataway High School in New Jersey. As a senior, Ross had 82 tackles, five interceptions and two forced fumbles.

The biggest addition to the Towson secondary is corner Justice Pettus-Dixon, a three-star recruit from St. Frances Academy. Pettus-Dixon was originally committed to the University of Connecticut before deciding to come to Towson.

The final piece added to the defense was corner Lyrics Klugh from Byrnes High School in South Carolina. Cornerbacks coach Derrick Johnson referred to Klugh as a “young Devin Hester,” the all-time NFL leader in kick return touchdowns, expecting him to be a difference-maker on special teams.

Size was added to the Tiger’s receiving corps with three players, each measuring at least six feet tall.

Christian Summers, a transfer from Valley Forge Military College is the tallest at 6 feet, 3 inches.  In his two years at Valley Forge, Summers made 98 catches and scored 20 touchdowns.

“He is going to bring a big, physical presence,” Wide Receivers Coach Mike Moyseenko said. “But he also has the agility to run past people and make people miss.”

Another big target will be 6-foot-2 Jay Galloway from Rockwell High School in Texas. Galloway is a state high-jump finalist and averaged 21.5 yards per catch as a senior on the football team.

The last receiver added is Keon Paye from Good Counsel High School. At 6-feet tall, Paye is the shortest of the group. However, he still caught 10 touchdowns as a senior and Moyseenko said he thinks that Paye may have been the “most explosive kid” the Towson staff evaluated.

At the end of the ceremony, Towson revealed its 2015 schedule. The opening game of the season is a trip to Greenville, North Carolina to take on East Carolina, an FBS school, on Sept. 5.

After a 2014 season that Ambrose referred to as “not pleasing”, the Tigers are determined to get the program back on track.

The Tigers will host their first home game of 2015 at Johnny Unitas Stadium on Sept. 12 against St. Francis.