Indeed, the president wasted no time declaring Tuesday night a major victory for his Republican Party, but Democratic analysts have different takes on the results.

Before Election Day, many forecasts called for a Democratic blue wave in the House that exceeded 40 seats. The Democrats have thus far flipped over 30 seats, and with returns still developing in many hotly contested California districts, the party may in fact secure the 40-seat projection.

It is first worth noting just how significant Democrats’ victories were on Tuesday. The Republicans currently enjoy total control of government, from the Congress to executive and state legislatures. What’s more, in 2011, following a major Republican takeover of state legislatures and, by extension, districting responsibilities, highly gerrymandered districts secured Republican control for nearly a decade. Many of these same districts however, designed to favor Republican candidates, swung left on Tuesday.

But House gains are not the only realm in which the Democrats have reason to celebrate. The Democrats also gained seven state legislatures and over 370 state legislative seats, proving that Democratic victories were consistent at all levels of government. These trends ran counter to those from both the 2010 and 2014 midterms, during which Republicans dominated.

Given gains in both the House and state legislatures, Democrats also have reason to be hopeful in Senate and gubernatorial races. Although Tallahassee Mayor Andrew Gillum initially conceded the Florida governor’s race to Ron DeSantis, as votes continued to trickle in, Gillum pulled within 0.4 percent of DeSantis, triggering a state-mandated recount. Similar trends were also present in the state’s Senate race, with incumbent Bill Nelson eventually coming within 0.2 percent of current Florida Governor Rick Scott. Moreover, a potential runoff in the Georgia governor race following multiple reports of voter suppression has instilled new hope in Democratic voters.

So what does a strong midterm showing – the first in nearly a decade – mean for the Democratic Party and the country in aggregate? First, a Democratically-controlled House effectively handcuffs President Donald Trump’s hitherto unchecked agenda. The House of Representatives also maintains the power to issue subpoenas and investigate Trump’s highly pursued tax returns. And perhaps most significantly, any budget designed by either the president or the Republican Senate will require Nancy Pelosi’s (presumably) stamp of approval, thereby diluting potentially radical spending initiatives.

Simply put, the Democrats’ performance on election night has implications regarding both legislative processes and overall political sentiment. Increased Democratic influence in Congress will undoubtedly lead to more moderate legislation, given that compromise is now required to pave the government’s way forward. But the political ramifications of Democratic victory, especially in previously held Republican districts, are not lost on either the Republican Party or Trump, who faces an impending election in less than two years’ time. 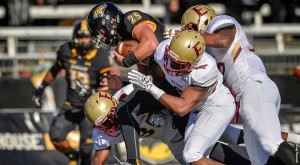