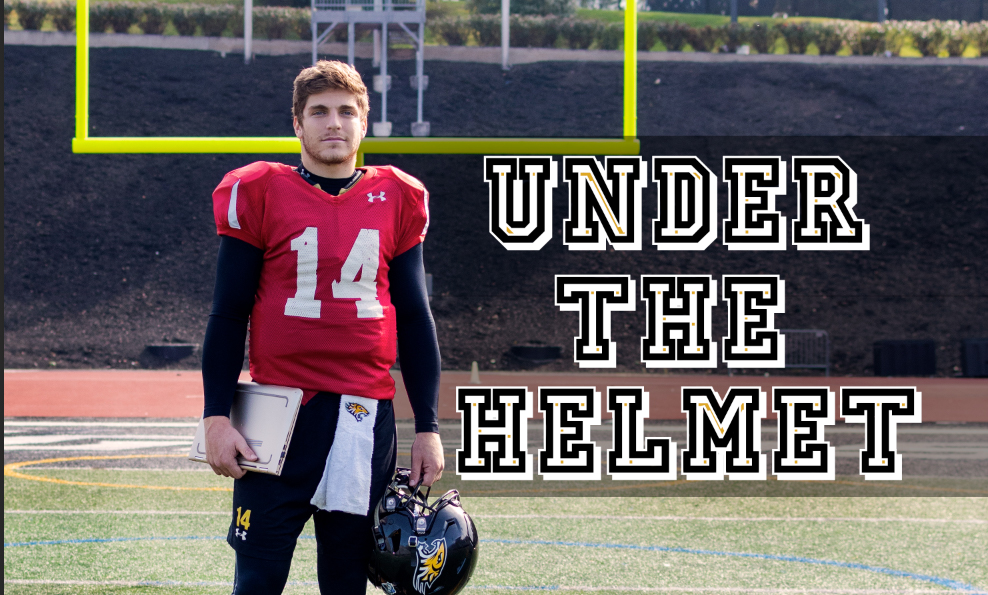 Towson redshirt junior quarterback Tom Flacco crawls out of bed at 5 a.m., making sure not to wake his roommate as sunlight beams through their apartment window.

He eats a banana and a cup of yogurt and heads to the athletic facility at Johnny Unitas Stadium to train and lift weights before practice begins at 7 a.m.

Practice runs until 11 a.m., then Flacco takes a shower, eats a breakfast sandwich and a bagel from THB Bagels & Deli and naps until 1 p.m.

That’s only the first half of his day.

“Around 1 o’clock in the afternoon you start to realize, ‘I’ve put in a whole day’s work just in that morning and I have to go to classes now,’ “ Flacco said. “It’s mentally tough.”

The 24 year old New Jersey native is getting his masters in applied information technology (AIT), which is the study of information systems to solve problems in the work environment. Flacco said he wants to pursue an NFL playing career, but no matter what job he ends up with, he craves a leadership position.

Despite his unwavering confidence in his athletic abilities, Tom shares the uncertainty in his post-college plans that many students have.

He said he does not have a specific backup career in mind if his football aspirations fall through, but he is self-assured that his athletic background will prove useful in the business field.

“Football is going to translate to my work career,” Flacco said. “I want to be a leader and that’s what I’m doing on the field. I’m the leader of the offense and guys look to me in tough situations. I want to take over a team in the workforce.”

Flacco is accustomed to a strong sense of unity. He grew up in Audubon, New Jersey as the youngest of six, with four brothers and one sister. He said having a big family only made everyone in it closer.

“I always had someone to play with,” Flacco said. “Whatever season it was, we would play that sport. That allowed me to always have that athletic background.”

Flacco said his father, Stephen, disallowed children in the family from playing organized football until sixth grade because he didn’t find it purposeful at such a young age. This rule gave Flacco the flexibility to expose himself to basketball and baseball.

He recalled how he loved playing different games with his neighborhood friends on the schoolyard as a kid because it gave him a strong appreciation for sports.

Reality quickly wiped those dreams away as Flacco grew up.

He played football, basketball and baseball throughout his four years at Eastern High School in Voorhees, New Jersey, but he had to commit to just one sport when entering the college ranks.

Flacco committed to football as he joined Western Michigan. In two seasons there, he appeared in 13 games as a backup before walking on to Rutgers in July of 2017 and recording zero snaps for the Scarlet Knights.

As Flacco came off a quiet season, so did Towson. The Tigers compiled a 5-6 record in 2017, and Head Coach Rob Ambrose knew he needed to find not only a quarterback, but a leader as well.

Flacco came to Towson as a graduate transfer this June for the last two years of his eligibility, and he has fulfilled Ambrose’s desire for a leader. The Tigers hold a 6-3 overall record this season, already an improvement from their 5-6 record in 2017.

“Normally, I have to teach quarterbacks tone and tempo of your voice,” Ambrose said. “He does that already. Everybody understands that he’s competitive. It bleeds into everything.”

Flacco, the younger brother of Ravens quarterback Joe Flacco, said he understood the implications of playing near Baltimore, but he stressed that his last name and family background have never factored into his decisions.

Flacco’s teammates attested to his down to earth demeanor, describing him as funny, intelligent, studious and mature.

“He’s not a guy who thinks he’s too big for the team,” said Shane Leatherbury, redshirt junior wide receiver. “He brings us together.”

Redshirt sophomore offensive lineman Nico Russolillo said Flacco connects well with his teammates on and off the field.

“Tom is not only a great player, but he’s becoming a great friend,” Russolillo said. “He leads not only with his words, but with his actions.”

Flacco emphasized that Towson’s success this season is a team effort, but his teammates recognize Flacco’s impact on the team as a motivator.

“He doesn’t want anyone to be content with being good,” Leatherbury said. “He always pushes us to be better. We know he’s always going to give his best.”

This competitive nature serves to boost Flacco’s ability in his post-football career, whatever that ends up being.