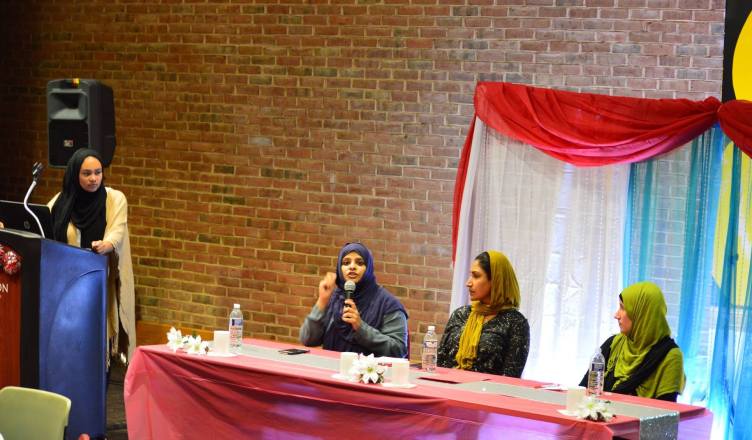 With their goal being to bring awareness to the misconceptions that individuals have about Islam, especially the religion’s approach to women’s rights, members of the Muslim Student Association hosted their annual “Jewels of Islam” event Oct. 20.

Guest speakers Hena Zuberi, Lauren Schreiber and Saira Khan shared their stories of how Islam affects them as women.

Zuberi is a reporter that shows the stories from a side that is not as well represented as other perspectives.

“I was covering events where there were no Muslims speaking for themselves,” Zuberi said. “That is why I became an activist: to give a voice for those who don’t have one.”

Schreiber spoke on how she converted to Islam.

“My first encounter with Islam was in a MSA program in my college,” Schreiber said. “I’ve encountered many Muslim people since that are stand out folks. This all led to my convergence.”

Khan’s story of how she started practicing Islam was much like Schreiber’s.

“I had a spiritual awakening once I started college,” Khan said. “That’s where I first truly started to practice my faith.”

MSA President Lyric Harris spoke about her own conversion to Islam.

“I became Muslim when I sat back and looked at all the different rights given to women in several religions,” Harris said. “I looked at the Quran to see how I as a black woman am viewed and found that they have more rights than what is listed in the Bible.”

The oppression of women was a topic discussed by speakers since the belief that Muslim women as a whole are oppressed is a common misconception people have.

“Where is this word coming from?” Schreiber said. “How am I oppressed in any way?”

Khan acknowledged the fact that oppression very much does exist, however.

“Oppression exists in a lot of different forms,” Khan said. “Are there Muslim women that are oppressed? Yes. So are some Christian and Jewish women. It is a sad reality.”

Harris gave explanation as to why there are such negative connotations to Islam.

“These elites in many countries do not want Islam to be looked at in a good light because it is all about power for them,” she said. “What people need to separate is their culture from Islam’s. Whatever that one radical person does, does not account for all of us.”

Khan spoke on the issues of women’s identity in the Muslim faith.

“Let’s take a scientific look at this, she said. There is only one race. Homo sapiens sapiens. We thought we could find differences between the races when looking at the whole DNA, but there was none.”

Audience members came for a variety of reasons, but one of the most common being to learn and educate others of the reality of Islam.

“It is a great event to be surrounded by diverse people of the same belief,” said student Akhirah Hare. “I want to hear other Muslim women share their stories.”

MSA fundraising chair Romesa Mustafa, noted that Muslim women may choose to cover their bodies as a personal decision rather than because they are controlled by men.

“I want to learn more about my faith and inform others on my religion to take away some of those negative connotations,” Mustafa said. “We as Islamic women are judged for covering up, but it is for the good of modesty not being controlled. As for the rights, people think men have the complete control but really it is more of compromises.”

Student Kate Kern came to Jewels of Islam to learn more about Islam for a course she is planning to take.

“Next semester, I am planning on taking a religious course that compares and contrasts Judaism, Christianity and Islam,” Kern said. “I came to this event to get more information to see if this really interest me.”

Kim Hangbi, an exchange student from South Korea, is a recent convert to Muslim.

“The Muslims are stereotyped by what is seen on television,” she said. “None of it is true. I came here to learn more since I have more opportunities here.”

Student Ghadah Mahrougi wants to be able to dispel misinformation about Islam.

“I really want to be the person to correct the misconceptions of Islam,” Mahrougi said. “I would also like to differentiate between the cultures of Islam. I want to have the courage to say what is true.”