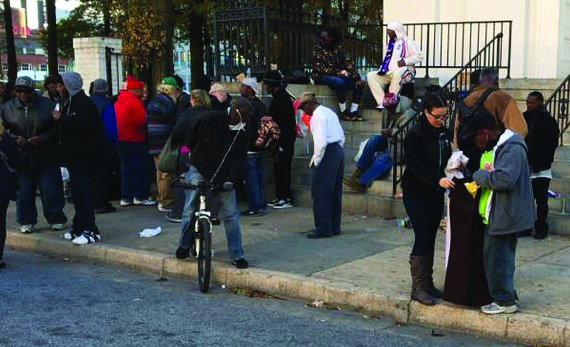 The event was split into two, between packaging and perishables in the Center for Student Diversity. MSA’s Community Service Chair Lyric Harris organized the event and had students donate clothing in advance so that it could be sorted.

“We had more people going downtown last year, but this year we had many more packing,” said Harris.

The CSD’s meeting area was filled with nearly 50 students during the packaging portion of the event.

Once the packages were put together, the students took multiple cars and met at St. Vincent de Paul church downtown, where over 50 homeless people meet to receive aid from various groups and individuals. The church is a safe place for them with a front park area and benches for resting.

“Some people need help, are disabled, ineligible or unable to work,” TU student Ali Ramjan said. “They need food to survive so we help them as much as we can. It could be me. I could be one of them and maybe someone else would help me.”

“It feels good and you’re seeing your work first-hand whereas you can donate money and not know where it goes,” Tayel said. “I encourage people to come out to this. It’s not just limited to Muslims, the MSA or ethnic groups, it’s a humanity thing.”

“I feel really good,” he said. “It’s not just about giving food…It’s about getting out of your bubble and comfort zone and doing it, especially if you have the resources.”

Other students such as Saleaha Pirzada have delivered items to the homeless at St. Vincent’s four times this year.

“If I was in that situation, I would want someone to help me,” Pirzada said. “I just feel like it’s something you’re supposed to do.”

Non-Muslim student Fionna Sunpongco has helped others before through organizations, but never person-to-person.

“It’s different than what I usually do,” Sunpongco said. “I wanted to come out because it’s winter and it’s harder for people to cope this time of year. They deserve a little attention.”