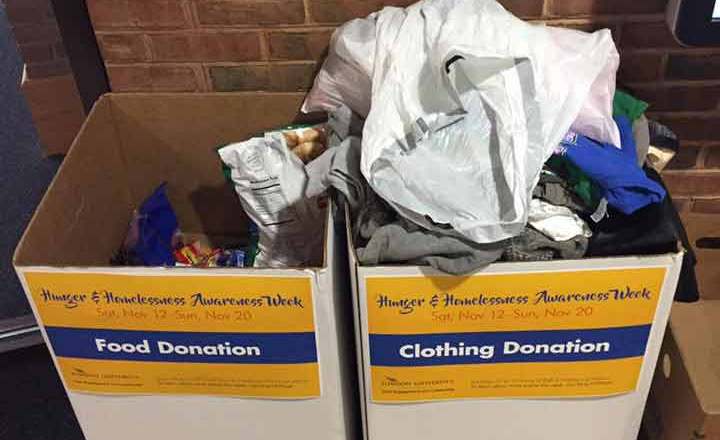 While some of their peers were gearing up for Thanksgiving feasts, other Towson University students worked to draw attention to domestic hunger and homelessness earlier this month.

TU’s participation in National Homelessness and Hunger Awareness Week, which began Monday, Nov. 14, kicked off with students posting signs adorned with hunger statistics near the Union patio that afternoon. Students were also able to donate canned goods and clothing that were later given to local organizations.

“We didn’t expect to accept donations, but we kind of created a box and they went to the FoodShare program on campus,” Coordinator of Community Service Corinne DeRoberts said.

On Tuesday, the Office of Civic Engagement and Leadership held a panel on homelessness in the West Village Commons. Guests talked about their work in their communities, their own experiences with homelessness and what students and staff could do to get involved.

DeRoberts said the Office of Civic Engagement aimed to “really to expose homelessness to the Towson community.”

Two different events held on Wednesday were geared toward helping those in need.

Beginning in the morning and going into the early afternoon, students put together care kits containing small luxuries like hygiene products that home less people might otherwise be without.

At the second event, which occurred in the evening, students joined Habitat for Humanity representatives in making blankets for shelters and peanut butter and jelly sandwiches for food banks.

All day Thursday, students could donate a meal to the FoodShare program by telling the dining staff member at the register that they wanted to donate a meal. Thursday night, a screening of “The Pursuit of Happyness,” starring Will Smith, told the story of a father and his son who fell upon hard times after the father’s girlfriend, Linda, leaves them.