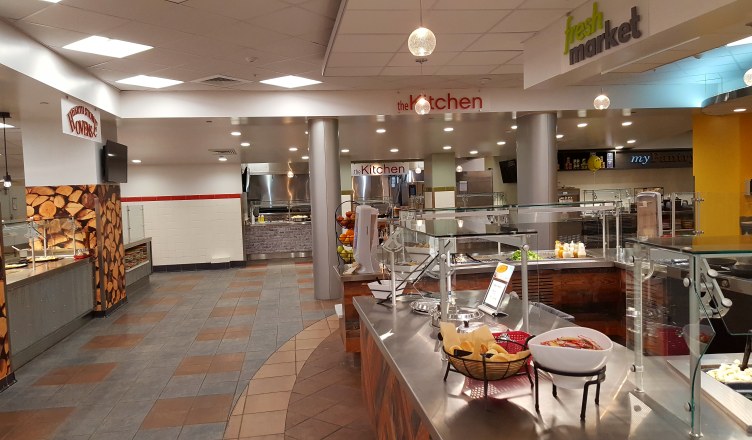 Newell Dining Hall and The Den have reopened this semester, following eight months of renovations.

The building received updates to its heating and air conditioning systems, plumbing, roofing, windows and lighting, while The Den itself has remained mostly unchanged aside from cosmetic touch ups, according to John Brady, director of operations for Dining Services.

The Den’s “Signature Deli” has been changed to a program called “Chop’d and Wrap’d,” a station where students can purchase diced vegetables and proteins in salads and wraps, Brady said.

The deli has been moved upstairs as the “Boar’s Head Deli” in what used to be a seating area outside of the dining hall.

During the day, the deli is part of the dining hall’s all-you-care-to-eat program.

After the dining hall closes, students can still purchase sandwiches from the deli but it is not buffet-style, Brady said.

The grill station, where chefs cook items like pasta and fajitas, has remained largely unchanged.

The area which Brady calls the “blue plate” station — where students can get hearty, main course meals like roast beef, mash potatoes and green beans — still has a place in the dining hall. However, the station has been shifted back toward the kitchens.

The dining hall now includes a pantry which is set up to look like a home kitchen and holds breakfast items like coffee and waffles.

In the same area, diners currently have access to apple and orange juice. Brady said the dining hall plans to include soy milk and a juicing machine.

The center of the hall is dedicated to the salad bar, a carryover from before the renovations. But the station now also includes omelets and other made-to-order items. The walls that used to house the kitchens have been opened up so students can see their food being cooked and can meet the chefs behind the meals they’re eating.

“The idea that you can see what’s happening in the back takes a little mystery out of it,” Brady said. “It adds some validity.”

If you were a fan of the old hotdog machine, don’t worry; it survived as well.

In the back area, where the kitchens used to extend, now exists a seating area and a bakery where students can pick up their favorite dessert treat.

Brady said the bakery plans to expand its role in the University and will allow students to purchase birthday cakes for their friends.

In addition to the seating area near the bakery, students can also sit in the renovated cathedral dining room.

The room, which looks like it’s been lifted straight out of Hogwarts’ Great Hall, has been outfitted with dark wood chairs, benches, long tables and iron chandeliers.

However, Tomszewski, a criminal justice major, said he was disappointed that he was unable to find his favorite cheesesteak at the dining hall’s grill station.

Brady said he’s heard a few complaints about certain items that have been taken off the menu, but he assuages those concerns, saying that they are “not gone for good.” He hopes that the dining hall will be able to adjust the menu and adapt to students’ dining desires as time goes on.

Fields, an anthropology major, said she does not have a gluten intolerance herself but that her family members do and so she’s grown up loving gluten-free foods. Newell included gluten-free and other special dietary need options prior to the renovations.

Other renovations in the dining hall include repainting, new tiling, switching to LED lighting to increase energy efficiency, and making the bathrooms gender-inclusive.

According to Dan Slattery, associate vice president of Auxiliary Services, the renovations were completed just prior to this spring semester in late January, and the University is correcting any operational issues at this point in time.

Although the University is still waiting to learn the final cost of the renovations, Slattery said the combined budgets for the two projects were set at around $7 million, and he predicts that the projects came in on or under budget.

With the new stations, Brady said Newell has increased employment by at least six staff members. Students can speak with dining staff to meet any special dietary needs.