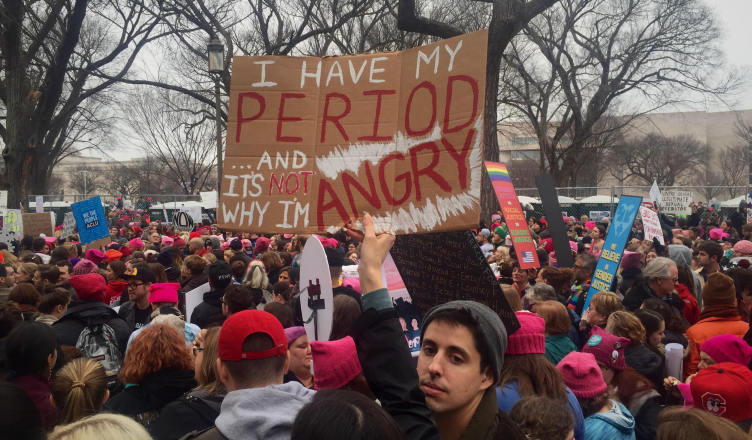 I attended the Women’s March on Washington with my twin sister and three of my friends, and it was truly one of the most powerful events I have ever experienced.

By the time we even arrived in the city that morning, there were so many people downtown that we couldn’t get anywhere close to the stage on Independence and 3rd St. Instead, we found ourselves about a block away on the other side of National Museum of the American Indian, waiting for the march to begin.

Except, it didn’t happen – at least not on time. There were so many people downtown that we as a group physically couldn’t move.

I was surrounded by people on all sides. For someone who gets anxious in large crowds, I was a little nervous, but I pushed through it and focused on what was going on around me.

And it was beautiful. When we finally started to march, the body of people slowly moved down Pennsylvania Avenue, stopping just short of the White House before turning around.

Even after spending the entire day walking, I honestly didn’t realize how tired I was until I finally sat down on the train home.

It was an amazing day, and I’m so proud of everyone who participated.

However, we can do better.

Among the pink hats, decorated signs and emotional chants, the march was lacking in one thing: intersectionality.

As a white woman, a Trump presidency will not affect me, and many others like me, in the same way that it will affect so many members of this country’s marginalized communities.

And I can sit here and speak out against the Trump administration all I want, but the reality is that according to exit polls, of the white women who voted, 53 percent of them voted for Trump.

That’s why it is imperative for us to recognize our privilege and to direct that privilege toward advocating for people without it.

The only way that we can be successful is to recognize that intersectionality is a vital part of feminism. What is feminism if it doesn’t include all people?
Keep going. Keep fighting. The march cannot end here, and I truly believe that if we are willing to stand up together, it won’t.