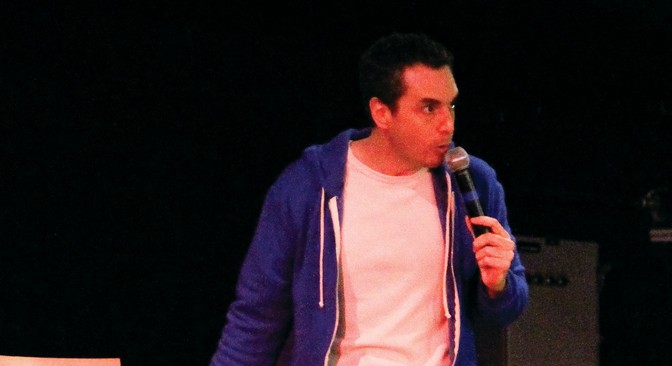 In the midst of exams and stacks of schoolwork, Towson brought students an evening of relief through laughter.

Campus Activities Board (CAB) brought six-time National Comedy Performer of the Year winner Eric O’Shea to Paws in the University Union for a night of stand-up comedy March 31.

“[My style] is observation with a voice of, ‘Can anybody help me out here, or does anyone have an answer for this?’ because we’re all working together,” O’Shea said. “I don’t really like to tell stories or have people listen to my life, it’s everybody’s life. It’s a nice way we all get to bond as a group.”

The audience cracked up at O’Shea’s jokes about road rage, technology, spoiled children, bad breath and even fart jokes told through his signature yelling, frustrated demeanor.

“Sometimes I’ll do silly stuff for exaggeration. It’s usually borderline between frustrated and silly and it’s a little random. You can be weird and bounce back, like is he going to be upset or is he going to be kind of silly? [I do] a lot of expressions of observations,” he said.

He said his show is “about growing up. I have two nieces I adore and I do a lot of voices in situations. I really try to bring the life to whatever that is.”

The Milwaukee native has traveled to over 1,200 colleges during his 22-year comedy career. He has been featured on NBC, VH1 and Sirius XM. O’Shea’s wildly popular “Songs for Commercials” bit has over four million hits on YouTube and he also performed it live at the Creative Emmy Awards in 2009.

CAB initially saw O’Shea at one of the National Association for Campus Activities (NACA) conferences and immediately knew they wanted to bring him to Towson.

“We saw him perform there and I don’t think I’ve laughed harder ever. I was crying with laughter and I thought, ‘Wow, we need to get him,’ and we did,” Programming Chair of CAB Jared Weiner said.

“I thought it might be a fun thing to do. I had never heard of [O’Shea] but he was really good and had some good bits. The jokes about what we did as little kids were great and relatable,” Farr said.