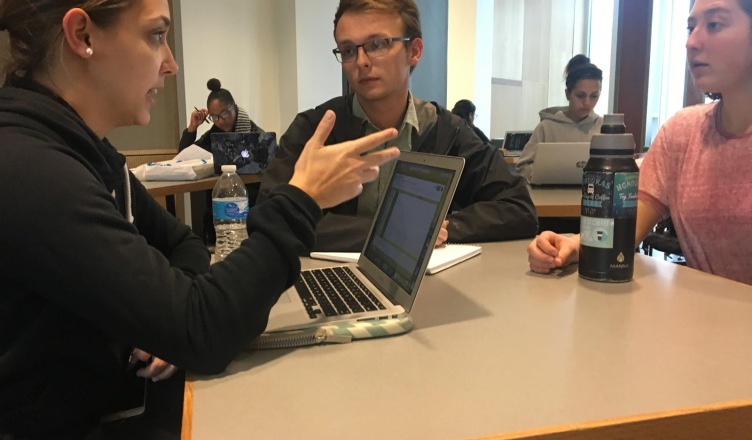 Photo by Lurene Heyl/ The Towerlight

A group of Towson University students who are part of the non-profit organization Students Helping Honduras travelled to Honduras to help build schools during this past winter break.

Towson’s chapter of SHH is part of a larger non-profit organization in the U.S., with about 100 chapters. Alex Laue, the former co-president of SHH, said the group’s main goal is to raise money through bake sales, thrift shops and other events around campus to build thousands of schools in Honduras.

Amanda Sipes, the current co-president of SHH, first got involved with the organization when she was a freshman.

For Sipes, her most memorable experience in Honduras as a freshman, was meeting Katherine, a local kid in the community where they were working at.

“After finishing up at the work site on our way back to the hostel [where the volunteers stayed], all of the kids just rushed over to us and they were so excited and happy to meet us,” she said. “They just wanted to play with us and become our friends. This girl came up to me and she hugged me. Her name was Katherine. The entire week we hung out, every single day after the work site she would be waiting for me to come out so we could play together.”

Sipes said the experience turned into a lasting bond between her and Katherine.

“It was the most amazing experience that I had just met this girl and we had formed such a close bond,” Sipes said. “It helps because I speak Spanish, we could connect by that but it was just so amazing that we got to spend every single day of the week together. When I came back the following year she recognized me and that was my favorite part.”

Laura Sullam, the group’s vice president, explained how the trip during winter break was a new experience for her as a trip leader. Sullam said she has been over to Honduras a total of four times — three during the winter and one during the summer — but that this was the first time she had stayed more than a week.

“It was definitely different because not only was I with Towson people on the week that they were there, but I got to trip lead the chapters from other schools and meet a lot of the new volunteers,” Sullam said.

Sullam said the main volunteer trip is typically on the work site, where the students work for several hours during the day under the hot sun.

“We wake up, we have breakfast together, [and] we go to the work site,” she said. “The work site is different depending on what school you are so, typically the school you’re raising money for is the work site you’ll be working on. Then we’ll eat lunch, have the afternoon to work, and we have fun activities.”

After a long day’s work, Sullam said the group gets to consider the day’s events and unwind with local residents.

“We’ll do reflections at night,” she said. “We have a night where we go to the soccer field to play soccer and we always play with the kids in the communities.”

Although this was the set routine for Sullam and the other student volunteers, she said each trip is different, giving volunteers a unique experience each time.

“It’s really different every time you go because you can’t predict what will work, how the schedule will change, and it teaches you to become very flexible and open-minded with anything that could be possibly thrown at you,” she said.

Sipes and her fellow SHH members agreed that the organization has been progressing every single year.

As for the future goals of SHH, Laue, Sipes and Sullam all agreed that they want to bring more awareness to the organization and make their cause known to not only Towson University, but the surrounding community and other schools in the area.

“When people that are close to us — like family or friends that we have here — when they see how passionate we are, I think it’s evident that it’s a great organization and it’s sustainable,” Sullam said. “I think spreading awareness [is the next step], whether it be friends our age or to anybody, that could help us spread the word.”

More information can be found by going to the organization’s website, SHHKids.org, which includes testimonials from participants and how to get involved.