Towson’s Student Government Association will formally relaunch #NotAtTU, Towson’s anti-hate crime and bias incident campaign, between Sept. 12 and Sept. 14 to include new freshmen and transfer students in a conversation that has been ongoing since last semester.

“Towson brings in a lot of new students every semester, and I think it’s important that we make it clear to everyone who’s new about the culture of Towson and the culture that we want to create,” SGA Director of Diversity Outreach Rishell Chambers said. “One of my biggest goals for the relaunch is to lay the foundation for new students to show that this is who Towson is.”

According to SGA President Taylor James, the November 2015 #OccupyTowson sit-in originally sparked the campaign idea, and racially biased incidents, such as the CLA Cafe incident in April, served to garner support from the community.

The campaign officially launched on May 5, 2016 through a joint effort from SGA and University administration.

James said that #NotAtTU was “a response to a lot of the emotions that the students were feeling.”

She said that she and former SGA President Kurt Anderson came up with the idea of the campaign to unify campus, not just through policy changes, but through a “culture shift.”

On the campaign’s official website, towson.edu/notattu, students can report hate crimes and bias incidents and  learn about available resources, what to expect after submitting a report and various hate and bias examples.

According to Chambers, the SGA’s role has been to promote the campaign and the online report form to students on campus. SGA’s Diversity Outreach committee has worked with the administration to develop some of the language for the campaign.

“A lot of the language around hate/bias is something that’s quite complicated,” Chambers said. “The difference between free speech and hate/bias lines aren’t very clear. [Administration] definitely helped to develop some sort of system of determining what is hate/bias and what is someone’s right to say whatever they want.”

The University administration played a large role over the summer in creating a more streamlined process for reporting hate and bias incidents online and developing some of the campaign’s language.

The committee in charge of the process was organized by Assistant Vice President of Student Affairs for Diversity Santiago Solis, who was placed in charge of revising the hate/bias reporting process by President Kim Schatzel in April.

“The committee worked diligently this summer on revising and updating the ‘Reporting Hate Crimes and Bias Incidents’ webpage and clarifying the response process,” Solis said in an email.

During the relaunch this week, SGA members will table in Freedom Square from 10 a.m. to 4 p.m. every day. The relaunch will also include trivia activities, giveaways and food, according to James.

Solis sees the relaunch as an opportunity to continue educating students about the negative impact of hateful language.

“It is everyone’s responsibility to help create a welcoming, inclusive and respectful campus community,” Solis said.

Both James and Chambers said that for the most part, there has been a good amount of support for the campaign from students, faculty and staff, but that some people have been skeptical about the campaign’s success.

“Students are really getting it,” James said. “Students have been really supportive. Some faculty have been really supportive… There still are faculty who don’t completely buy the idea that we’re going to be able to shift a culture. That comes with anything really. There’s going to be some people who just don’t buy in, and there’s some students who feel the same way.”

James specifically mentioned the University Senate as a body that has not been supportive of the campaign.

According to James, the hate/bias syllabi language and the reporting process were poorly received by the Senate’s faculty members.

In a previous Towerlight interview, James said that she presented an initiative to the Senate to place hate/bias reporting procedures on every University syllabus, but the initiative was unable to gain traction with Senate members.

In an email, University Senate member Richard Vatz said that the University has had “an unfortunate recent history of administrative control of syllabi content beyond the necessities of neutral information.”

“I think there is nothing wrong with suggesting it but that mandating such would be an infringement on academic freedom,” Vatz said.

James and Chambers have both expressed ongoing enthusiasm and support for the campaign and see it as being successful through both this academic year and into the long-term future.

“I’m hoping that this campaign will leave behind a Towson that we can all be proud of and a Towson that reflects and leads the way for what we want America to become,” Chambers said.

According to Solis, the administration will continue to provide guidance, feedback and support to SGA throughout the campaign.

This fall, SGA and the administration will collaborate on new “Be Heard” monthly town hall-style meetings.

The meetings will create a space where students can ask questions, provide input and engage in discussions about diversity, equity and inclusion on campus, according to Solis.

The first “Be Heard” meeting is scheduled for Sept. 21 from 7-9 p.m. in West Village Commons Ballroom A. The meeting will include an update on the #OccupyTowson demands.

“I want to hope we get to a point where we don’t need this, where we’re all civil, we’re all respectful and it can shift into something more positive,” James said. “I think the education piece of it will hopefully continue a long time moving forward, but hopefully in a more positive way.” 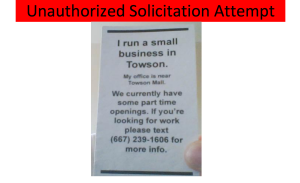