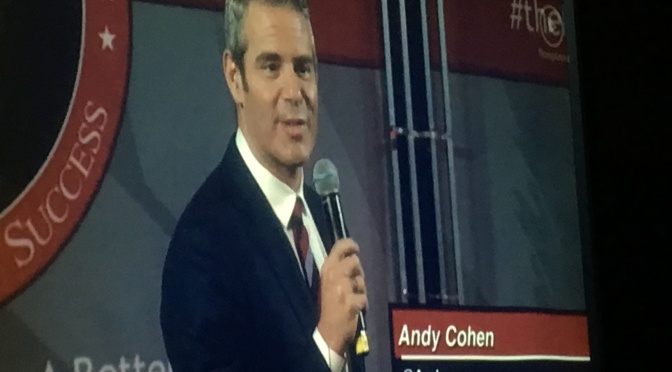 The live telecast was a part of the NSLS’ national speaker series, and chapters around the country joined in to participate in the discussion. Students could send questions for Cohen via Twitter and an interactive Facebook poll guided online conversation.

Towson NSLS Vice President Brett Hooper explained that the speaker series is an opportunity to “showcase active leaders in the world” and to help students learn skills for success from the writers, newscasters, and actors who participate.

Cohen began by describing his path from high school to where he is today, delving into the twisting turns that both sidetracked and focused him, all the while teaching him valuable lessons about the business and life itself, he said.

“Passion for what I was doing made me better,” Cohen said. It helped him “stand out as an intern and employee.”

He credited internships and jobs he had in high school and college as training grounds where he learned to multitask and to talk to people. He cited these two skills as the catalyst for his success, and he recommended that students pursue as many experiences as they can as soon as they can.

From producing The Real Housewives of Orange County to publishing his own book, Cohen’s career has evolved and required him to take risks to get to the next step.

He acknowledged that not every position he held was a “home run,” and that he often had to grapple with not getting the job he thought he wanted.

Each experience was an opportunity to gain new skills and meet people, especially mentors “who believed in me, knew what my dream was, and helped me achieve it,” Cohen said.

For those who have not quite found their passion, Cohen recommended narrowing down what it might be by paying attention to sparks of interest, and be self-aware to start chipping away to uncover what creates happiness in life.

“If you figure out what you want to do and get yourself there, passion will motivate you to the next thing,” Cohen said.

After finishing his career story, Cohen answered questions sent by NSLS members across the nation.

Post-discussion, a participant poll conducted showed that 87 percent of respondents said their goals were to “turn their passion into their career.”

After the broadcast, Hooper spoke positively of Cohen’s message, noting that it was shared upbeat, engaging manner. As a takeaway, he was impressed by Cohen’s “dedicated work style.”

According to the TU website, the NSLS “provides a step-by-step program for members to build their leadership skills.”

There are 509 chapters across the country, with membership surpassing half a million students. Member benefits include scholarships, access to a job bank and invitations to exclusive events including live speaker sessions.

According to Hooper, the club’s goal is to help people to achieve their goal, whether short or long-term, and help students become influential, successful model leaders in the world.