Maryland Correctional Enterprises is a state agency within Maryland’s Department of Safety and Correctional Services. At 30 different shops across the state, inmates work on making different products, including furniture, sign making and license plates.

One of the demands from the student sit-in was to get the University System of Maryland Student Council to review the contract between Towson University and MCE.

“We find it problematic that we finance the same institution that profits off of black bodies,” the demand states.

Shortly after the sit-in, then Interim President Tim Chandler sent a letter to USMSC president Gayon Sampson to begin a review.

Sampson and other student leaders, including then-SGA President Kurt Anderson, were able to tour several MCE facilities and speak with inmates to evaluate the program.

A report that was supposed to come out of those tours is not listed on the USMSC website—which has not been updated for the 2016-2017 school year.

Anderson said he toured prisons and design centers, where he saw inmates working with advanced software programs to design furniture along with other career-building skills.

“Yes, they’re paid cents on the dollar for the time, but one they’re serving a sentence and two, they’re learning a skill,” Anderson said.

Anderson said that one of the inmates told him that the 4 hours each day she worked in MCE facilities were the only times she felt treated “like we’re human.”

“Although MCE is responsible for producing a variety of products and services across the state, our most important mission is our returning citizens,” Gerard Shields, a spokesman for MCE, said in an email. “MCE provides inmates with much needed work skills and work ethics that will help them upon release.”

MCE denied The Towerlight’s request to tour one of the facilities.

Towson University considers demand four satisfied because of the letter Chandler sent and the review conducted by the USMSC. 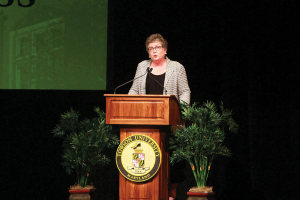 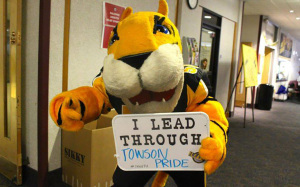