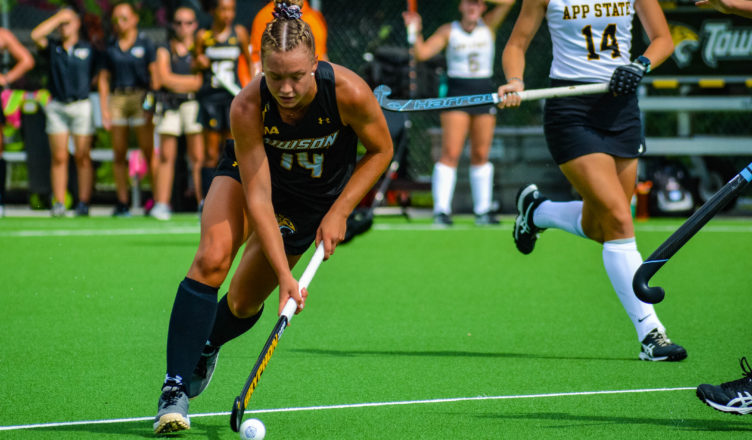 photo by Owen DiDonna/ The Towerlight

Towson opened up the season at the new Towson University Field Hockey Complex with a disappointing 3-0 loss to Appalachian State.

“There were some really great things that happened,” head coach E.A Jackson said. “We created opportunities, we got into the attacking circle, I think we have some good film to watch to make sure our forwards our cutting back to the ball so that when we work really hard to create those opportunities we’re actually maintaining possession and not just giving it away.”

The youth and inexperience of the Tigers showed throughout as the Mountaineers dominated possession and pressured the Towson defense incessantly. Appalachian State was able to draw nine corner penalties, including five in the first half. App State also tested freshman goalie Tess Okkerse often, sending 11 shots toward the freshman, with most coming in the fourth quarter at five.

“I think their first two goals were from really quick breakaways,” Jackson said. “I think we can defend better.”

The Mountaineers were led by junior midfielder Meghan Smart and her two goal performance, and was flanked by sophomore midfielder Friederlike Stegen and her single goal. Smart stroke first, scoring after Okkerse pulled out a little too far from the goalie box. The second goal of the day came from Stegen in the second quarter. Freshman forward Sarah Farrell fed Smart for her second goal of the day in the fourth quarter after an Okkerse save and Farrell saved the ricochet to send to Smart for the goal.

Okkerse was one of the few positives in the contest for the Tigers. She was able to save six shots, and a game-high of four in the final quarter. Jackson had some good reviews, telling the Towson Sports Network she liked how the freshman goalie communicated and led the defense from the box. Despite it being her first collegiate game, Okkerse played with the poise of a senior according to Jackson.

“She’s just a technically sound goalie,” Jackson said. “ She doesn’t play like a freshman she plays like a senior, she communicates effectively from the back, our defenders really count on her. They’re willing to take chances to step up and try to create attacking situations off of defensive situations.”

Another positive and a weapon that can be utilized was the speed of freshman attacker Dominique Nelson. Towson also saw another strong moment from another freshman when attacker Georgia Beachley recorded a shot-on-goal in the third quarter.

Towson was able to get some things going in the fourth quarter. The Tigers forced three penalty corners, with shots coming from sophomore defender Gretchen Alderfer and sophomore midfielder Kathryn Parkinson just before the Mountaineers regained possession.

“Part of our DNA is not to give up,” Jackson said, “ They’re going to fight until there’s no time left on the clock. I think the fourth we’re really focused on showing up (in) the fourth quarter strong. They’re baseline fitness is unmatched, I mean we watched App State hit their wall going into the fourth quarter.”