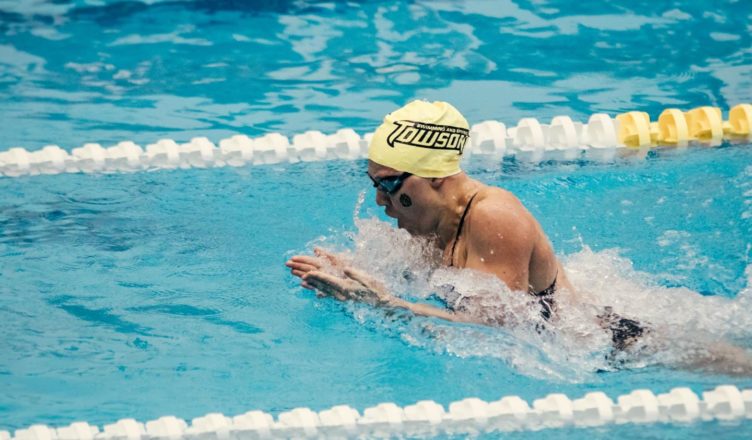 The Tigers competed at the Colonial Athletic Association (CAA) Championships this weekend, ending with a third-straight bronze medal for the team overall.

Head Coach Jake Shrum had a simple objective for the team.

“Our goal going into every CAA championship is to go as many seasons with the best times as possible,” he said.

Senior Jack Saunderson broke his own CAA and overall record in the 200-yd individual medley with a time of 1:45.46.

Sophomore Will Canny had an impressive win in the 3-meter dive with a score of 320.70, qualifying for the NCAA’s along with Saunderson.

“Will Canny had a terrific meet, placing second on 1-meter and winning the 3-meter diving event, qualifying for the NCAA Zone Diving meet and winning Diver of the Meet,” Shrum said.

For the women, the bronze finish was solidified with a win from senior Amanda Rosa in the 200-yd breaststroke (2:15.04).

Junior Jacki Schoening clinched an NCAA qualifying position with a win in the 100-yd breaststroke (1:01.58). Rosa came in second with a time of 1:01.81 and also qualified for the NCAA’s.

Senior Haley Sutton’s second-place finish in the 100-yd backstroke (54.60) was the second-fastest time in Towson history.

In the end, the Tigers finished fourth overall, with a third-place podium spot for the women and a fourth-place finish for the men.

“It was a fantastic season,” Shrum said. “We didn’t hit the last meet as well as we could have, but this team has been special all season and I expect that to carry over to next season. While we are graduating a lot of great swimmers, divers and people, we also have a great class coming in.”

Next, the Tigers that qualified for the NCAA Championships will compete from March 20-23 in Austin, Texas.