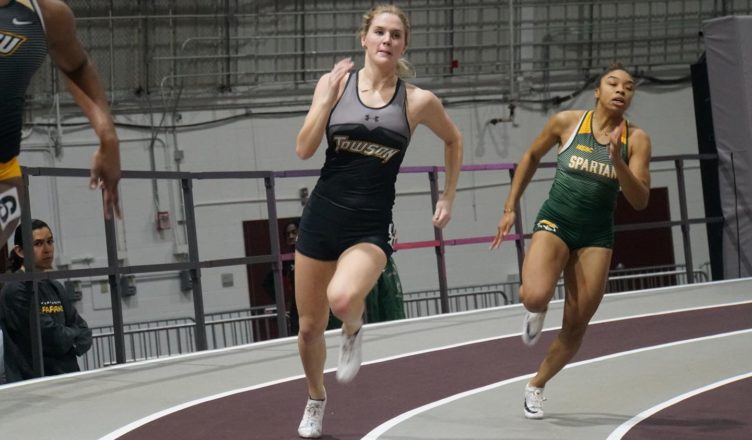 Towson began the outdoor track and field season by competing at the Maryland Invitational in College Park, Maryland on Saturday, March 16 as well as in the Doc Anderson Invitational in Troy, Alabama this past Friday and Saturday.

Freshman Hayley Horvath won the pole vault with a mark of 3.80 meters and met the qualifying standard for the Eastern Collegiate Athletic Conference (ECAC) at the Maryland Invitational.

“She’s just one of our best and when she does well, we’re not surprised,” said Head Coach Mike Jackson. “She actually went from a short approach. It was pretty cool out so, considering the elements and the approach she had, it was a great, great performance and a great way to start off the season.”

Sophomore Maria Bravo placed second in the discus throw with a toss of 38.74 meters and finished fifth in the hammer throw throwing 45.08 meters.

Freshman Crystal Johnson placed first in the 100-meter dash and earned the third-best time in school history of 11.84 seconds on the second day of the Doc Anderson Invitational.

“She’s a special talent,” Jackson said. “Nothing she does is surprising although she tends to surprise herself. She is very good so working on harnessing her talents and getting her to be more and more confident and believing how good she is.”

Sophomore Shelby Francis earned her best season-opening time in the 400-meter hurdles with a time of 1:02.82, winning the event.

Junior Michella Obijiaku won the shot put with a throw of 14.86 meters while senior Phontavia Sawyer placed second with a toss of 14.28 meters.

Sawyer’s throw of 45.52 meters won her the discus throw.

Junior Helnsarah Penda, who had her best season-opening performance, placed second in the 100-meter hurdles with a mark of 14.11. Junior Victoria Jones-Alleyne took third in the same event with a 14.15 mark.

Senior Naja McAdam placed second in the high jump while freshman Ani Boghossian-James came in fourth place fourth as both finished with a 1.60 meter mark.

“Their expectation is to take care of business no matter what the elements are and they did that,” Jackson said. “Tory, Alabama is a place we’ve never been and those student-athletes that we competed against are people who have never seen or heard of us so we wanted to make sure we left our mark and give them a bit of an education on Towson University track and field team.”

Riggins placed first in the long jump with a collegiate-best mark of 5.53 on the first day of the Doc Anderson Invitational.

“She’s a great athlete,” Jackson said. “She wasn’t able to compete last year due to injury so she’s just coming back and it was a little cool out. She wasn’t feeling her best physically as well, but she really toughed it out and got the win so it was great for her to build her confidence and have her know that what she is doing is working.”

The Tigers will split the team the next time they compete as different athletes will travel to the three-day Pepsi Florida Relays in Gainesville, Florida, the Raleigh Relays in Raleigh, North Carolina or the Navy Invitational in Annapolis, Maryland between March 28 and March 30.