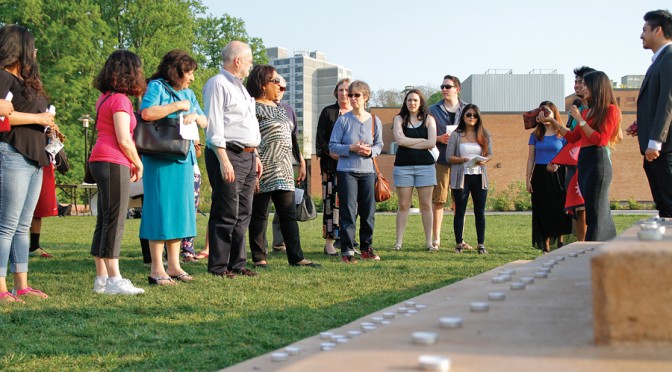 When natural disasters occur around the world, they hit home for many Towson students. Senior finance major Ayush Malla was deeply heartbroken by the news of the recent earthquake in Nepal because he has roots in the country and loved ones directly affected by the quake.

“The first thing that came up on my mind was my family,” Malla said. “Being thousands of miles away I was helpless and to make the situation worse, phone lines weren’t going through. I was very relieved to know that my family was safe. However, it didn’t last long as I started thinking about the millions of people that were affected by this devastating incident.”

The 7.9 magnitude earthquake was a destructive hit for Nepal and affected thousands of lives. Malla and a group of fellow students sprang into action to help those in need of resources by fundraising for those impacted by this disaster.

“We are hoping to reach out to the people in the outskirts of the valley by providing them with basic necessities like food, water, blankets and preventive medications,” Malla said.

They plan to send the money they raise to Lightening Nepal, a non-governmental organization that works on sustainable projects for the development of rural Nepal. Lightening Nepal has teamed up with the Ganeshman Singh Foundation to work toward relief and rehabilitation for the village Manhendra Jyoti VDC, which consists of over 800 families.

Ayush Malla’s cousin and Towson alum Riya Malla discovered a newfound appreciation for her connection to her homeland that she feels is sometimes taken for granted.

“I love my country and I have always known that I love my country, but unless it hits you, you won’t realize how much you love your country,” Riya Malla said. “When you lose something, you then know the value of it and that is what happened to me. We lost the city that I grew up in.

Riya Malla initially donated $100 when she learned about the earthquake, but felt that the donation was not enough and wanted contribute more to the relief efforts.

The group began selling authentic Nepalese momo dumplings on campus to raise awareness for Nepal. Support flourished from both students and the university at large.

“We have raised almost $1,700,” Riya Malla said. “We unexpectedly sold out of dumplings in three days. We want this to be an on-going progress.”

The students also organized a candlelight vigil Thursday, May 7, at Tiger Plaza to remember and pay homage to those affected by the earthquake. Senior healthcare management major Sheyi Ashiru attended to show her support.

“It is always very sad to hear about a tragedy that happened in another country, but I came out here today to donate and support Nepal,” Ashiru said. “I admire those who came out to the vigil and our presence helps make a difference.”

If you would like to support the Nepal relief efforts, visit www.gofundme.com/towsonuniversity to donate. Also visit “TU Tigers Earthquake Relief for Nepal” on Facebook to find out more about how donations will be utilized.