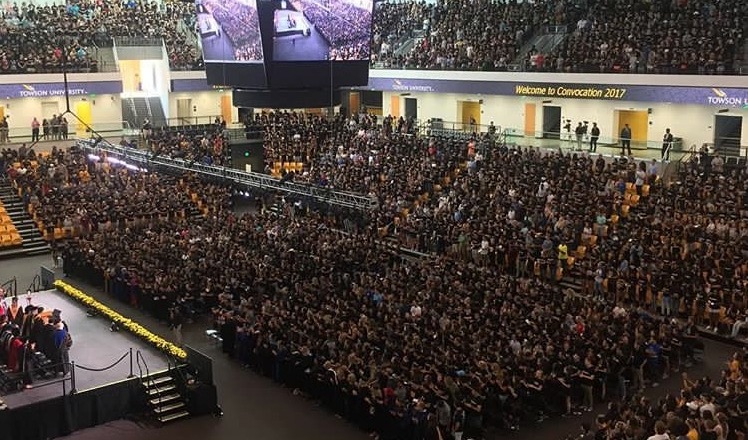 “With all of your fantastic diversity, your amazing intelligence and drive, your commitment to community, your desire to connect with new people and new places, [and] your belief that we all can do well by doing good, start here by making TU a more welcoming and inclusive place for all of your classmates and community members,” Schatzel said.

One in five new students this year is not from Maryland, with students hailing from 25 different states and 14 foreign countries, according to Schatzel.

Schatzel welcomed students to their new home and encouraged them to make Towson “more open-minded, more open to the sharing of ideas through thoughtful debate.”

“Remembering that first and foremost, graduation is your goal, and getting an outstanding education is a key to your future,” Chandler said. “I want you to know that we are totally and utterly committed to your academic success and truly want you to excel while you’re here.”

Moriarty led the new students in reciting the Tiger Pledge, committing themselves to Towson’s ideals of respect, leadership, growth, engagement and pride.

Karen Fallon, professor of speech-language pathology and audiology, shared her three “up”s for students to make the most of their time at Towson:

Fallon encouraged students to ask questions, volunteer and get to know the faculty “who truly care about you, who care about your learning, and who are invested in your success.”

“For all of you Legally Blonde fans out there, channel your inner Elle Woods and connect with people around you,” she said. “Take advantage of all the wonderful resources around you and embrace this time.”

Student Government Association President James Mileo shared some vulnerable moments with the incoming students, recounting a relationship with an ex-boyfriend who tried to control where he went and who he talked to.

“In that moment, I believed my survival was dependent on our relationship,” Mileo said. “All the abuse — physical, mental, emotional – were the cost of being able to live.”

Mileo said that after he and his ex broke up, he felt broken, but he also saw the experience as a chance to grow and reclaim who he was.

“If you’re broken, you have to put yourself back together,” he said. “So for you all sitting here today, this is your time to rebuild yourselves, put yourselves together.”

Mileo also addressed last year’s attempts to impeach him by a group of SGA senators while he was vice president of SGA.

In February 2016, former SGA Senator Chris Shanahan and three other senators accused Mileo of abusing his power and breaking a state law related to SGA salary.

The impeachment attempt died before a special resolution for impeachment was brought to a vote.

He said the experience was isolating and that he felt discouraged from running for president until he talked to his mentor.