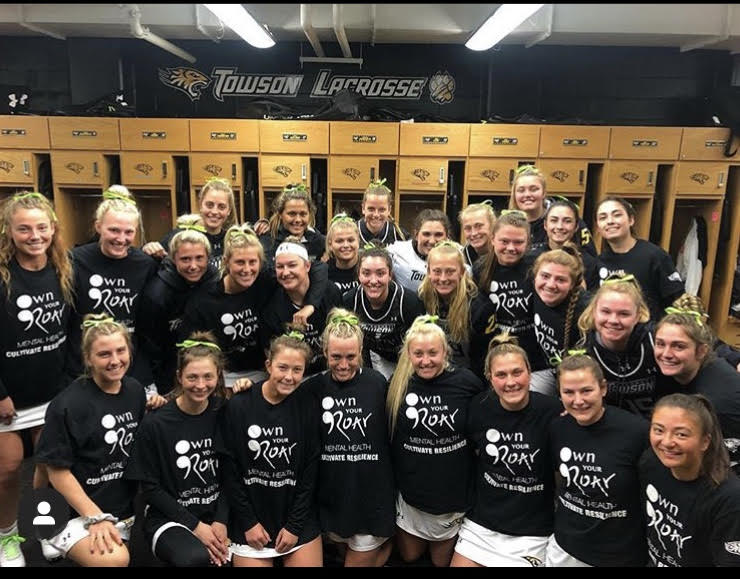 After rupturing her Achilles tendon her sophomore year at Towson University, gymnast Olivia Lubarsky knew what to expect in terms of physical recovery, but the student-athlete struggled to navigate a different aspect of her wellness.

Lubarsky, now a senior, began to struggle with symptoms of depression starting her freshman year, and before her injury, had hoped to use athletics as a way to cope.

“I instantly noticed a disconnect between support and treatment I received for mental illness versus physical injury,” said Lubarsky, who wasted no time after surgery approaching Towson with her plans to enact a mental health initiative.

Lubarsky partnered with TU’s Student-Athlete Advisory Committee (SAAC) in 2018 and founded “Own Your Roar,” an awareness program which uses sports as a platform to start conversations about mental health among student-athletes.

“With the copious stigma and discrimination that surrounds mental illness, I thought that developing an awareness campaign would be a beneficial start to normalizing and validating mental health,” she said.

The campaign works to show the importance of mental health alongside physical wellness.

“Counseling Center clinicians know that mental health awareness is just as important to living well as maintaining good physical health and fitness,” said Greg Reising, Ph.D., Director of TU Counseling Center. “Programs like ‘Own Your Roar’ as well as the various outreach programs that are offered through the Counseling Center can help our students to be more aware of mental health issues and to take steps toward improving their coping skills and resilience.”

The name “Own Your Roar,” Lubarsky said, is a play on Towson’s tiger mascot, as well as a symbol of channeling one’s strength and inner voice. In a profession where physical injuries are expected, the program aims to eradicate the stigma associated with the treatment and perception of mental illness in sports.

“Starting the conversation and creating an environment in which student-athletes are comfortable to openly express themselves will only serve to increase their competitive advantage on and off the field,” Lubarsky said.

The TU senior is all too familiar with the pressure accompanied with high standards set for student-athletes. A fear of failure, she said, is what led her to depressive symptoms.

“When I didn’t achieve the unrealistic and perfectionistic expectations, I was extremely hard on myself and soon this spiraled into a fear of failure that made even the simplest of tasks difficult and dreaded,” Lubarsky said.

Lubarsky worked with her fellow student-athletes in 2018 to create a promotional video for “Own Your Roar,” highlighting many of the emotions and stressors involved in playing a sport.

“I want to be the best that I can for my team, but I’m so trapped in my head and I just can’t get out,” Kalyn Fetter, senior swimming and diving student-athlete said in the video.

Juwan Gray, a redshirt junior for the men’s basketball team, credits good mental health to success as a student athlete.

“Being a student-athlete is already stressful enough with maintaining a high GPA, being 100% committed to your sport such as practicing 30 hours a week, and maintaining a social life,” Gray said. “The physical ability is important, but the mental side is even greater.”

This semester, “Own Your Roar” introduced a trained mentorship program led by 80 older student-athletes who represent all sports on Towson’s campus. Lubarsky said the program was designed to help student-athletes who may be feeling isolated as they come to terms with their mental health.

“While mental health education is extremely important, we run the risk of telling student-athletes and anyone that their feelings of depression, for example, are due to a chemical imbalance in their brains,” Lubarsky said.

“Own Your Roar” works with student-athletes to show how mental health can be both properly understood and managed.

“By coupling this education with mindfulness, leadership, resilience curriculum, we give student-athletes the tools to cope with their emotions, cope with the unique stressors that we face as collegiate athletes, and cope with failure – which is hardly ever acknowledged in athletics and deemed unacceptable,” she added.

According to Reising, giving emotional support is “one important part of maintaining good mental health.”

“For example, the Counseling Center offers various kinds of counseling groups for this purpose, in which students learn to share of themselves and mutually support each other toward their goals,” he said. “Students can also benefit from the many mentorship opportunities that are available at Towson University.”

Since launching “Own Your Roar,” Lubarsky has been approached by other student-athletes hoping to start similar programs at their universities. The gymnast’s nationally recognized mental health initiative has inspired ones similar such as UCLA’s #BruinBrave campaign, and James Madison University’s #DukesLetsTalk campaign.

“‘Own Your Roar’ is a place of expression, free from judgment, and has developed a sense of community within the athletics department, uniting athletes of all class standings and sports,”said Lubarsky.

The gymnast applied on behalf of Towson University, which was one of 15 universities chosen by the nonprofit to take part in a campus tour event centered on mental health.

“‘Own Your Roar’ will be the reason that many people gain confidence within themselves and ultimately succeed in life past college athletics,” said Jake McLean, who plays for The Towson Tigers Men’s Lacrosse team. 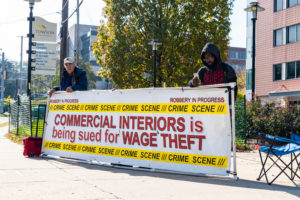