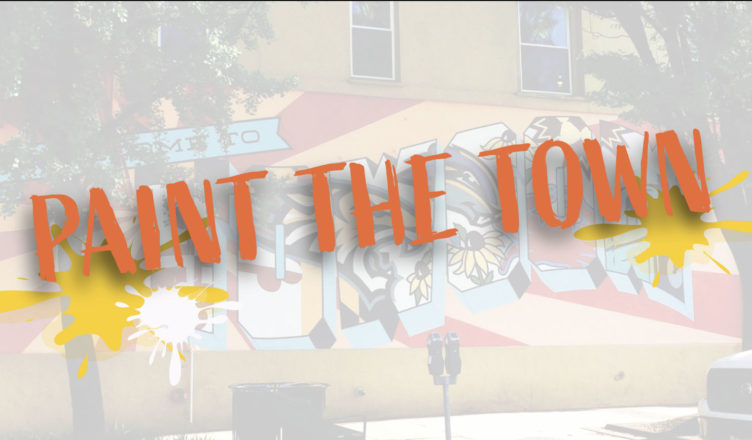 You may have already noticed that large, newly painted, “Welcome to Towson” mural alongside Nacho Mama’s in uptown. Its elements express what it means to be centered in Towson, including Towson University and Goucher College’s respective mascots.

The mural, painted by Greenbrier artist Amy Redondo, is part of the Towson Creative Partnership’s (TCP) mission to create a creative, urban landscape in the city. TCP has also completed a number of other murals in the surrounding area, including one in the Knollwood community by local artist Liv James.

“In a perfect world, we would love to be able to have a dozen [murals] placed throughout Towson, basically creating a walking tour of public art that you see obviously in places like Nashville and Australia” said David Riley, the co-founder of the Towson Creative Partnership (TCP), which is a part of the Towson Chamber of Commerce. “We’ve got one, and we hope to put up a number of other ones. TU has already been a tremendous part of this.”

After seeing success with their mural projects, TCP is seeking to reach beyond mural painting.

In February, Triple Crown Tattoo, located upstairs from Wells Fargo, opened its doors and became the first tattoo shop in uptown Towson. It’s owner, Deirdre Aikin, is the co-founder of the Towson Creative Partnership. Her shop has been serving as an anchor for TCPs operation. Aikin said her doors are open to any and every student.

Her space doubles as a tattoo parlor and an art gallery. The art gallery aspect was a legal requirement for her tattoo shop to open in uptown. However, she has been more than excited for its exhibitions to come. She currently features artwork largely made by students from local colleges, including Towson and Stevenson.

“We have two student art shows which will be here in September [and October]” said Aikin. “One is the [TU] Photography Club, and the other is by the [TU] Communication [Studies] department. One of them is definitely a little controversial, and TU, even though the subject is very hot and heavy for right now, thought it was too political to do [on campus]. However, it’s totally okay for me.”

Michele Alexander, the marketing and public relations manager at the Center for the Arts,has been working with the TCP to connect Towson students to the organization.

“I met [Riley] very early on when I first came here about a year and a half ago,” said Alexander. “I agreed with him and felt very strongly that we needed more public art.”

TCP and Center for the Arts have begun planning their first community event.

“[Aikin] and I are starting to work on our next public works project, and [Towson University] will be playing an active role in a number of projects to come,” said Alexander. “The next project we’re working on planning is painting the BGE electrical boxes and the flower boxes that are around town. Ideally we can get art and design students working on those projects.”

Aikin and Alexander are hoping to incite interest within the community to keep the city looking good.

The box painting event will be open to the public, according to Aikin, and she hopes to get fraternities and sororities involved. Aikin is going to do an open call for the designs for the flower boxes that are up along uptown and on the side streets, and “have a day of art.”

“Everyone is going to get a flower box, and we’ll do this in groups, or singles,” Aikin said. “They get an hour to set up, three hours to paint, and the streets will be filled with everyone in the community adding their art. And not only will it make the city look good, it will keep vandalism down, and it will make the businesses get a little more involved with the community. We’re hoping to get groups and organizations involved so that they care for their art boxes and help take care of our community.”

Riley and Aikin are also considering hosting a small film festival on the roof of Aikin’s space, as well as student film competitions, interactive art exhibitions, and much more. They want students to utilize the gallery.

According to Alexander, being an active member of the community, and partnering with groups such as TCP, is very important to Towson University, and in alignment with TU President Kim Schatzel’s current priorities.

“There is so much building happening in Towson,” said Alexander. “Just like how Towson University is growing, so is the city of Towson. It is really important to have public art because you want to draw the creative class, young people and families to Towson. It’s not just about supporting the arts, it’s about supporting a socioeconomically healthy environment.”

Aikin was previously a professor at MICA in Baltimore. Her goal is to extend an arm to art students who want to showcase their more political or “out there” art pieces that the university won’t, to art students who are struggling to obtain a spot in the university galleries, or who simply would like to showcase their work in her space. Her art gallery is a diverse space, and she plans on working with Towson University and its students to host as many events as possible in the future.

In fact, she has already made a difference. According to Riley, though there were a number of people behind the mural, Aikin was a creative leader behind tagging that dull wall with the vibrant mural you see today.

“The [art] department is always looking for opportunities, and for the right kind of wall space for the students,” said Alexander. “They are in constant communication with the students about opportunities when they come up, and [Aikin’s] space is one of those opportunities. The Communications department, in fact, have scheduled an exhibition up there in October, and she is also going to be hosting a graduate exhibition there as well. We will definitely be holding some exhibitions in her space because it’s a really neat space.”

Aikin expressed that she encourages students to visit the storefront for artistic assistance and for a place to let their creative visions come out.

“I would love for art students to hang out and do quick sketches of people who are walking around in here, or use this as a place where they need to step away for a minute and can sit and sketch” Aikin shared. “Bring your sketchbooks bring your journals and sit and think about what you need to do. Everybody who works here is a professional artist. Everyone here knows color theory, everybody here knows perspective, and I used to teach at MICA.”

Triple Crown Tattoo is located upstairs to Wells Fargo in uptown Towson. Aikin said her doors are open to any and every student.

“If you want an outside perspective on an art project that you’re working on, or you’re not quite sure how to approach something, just ask us,” she said.