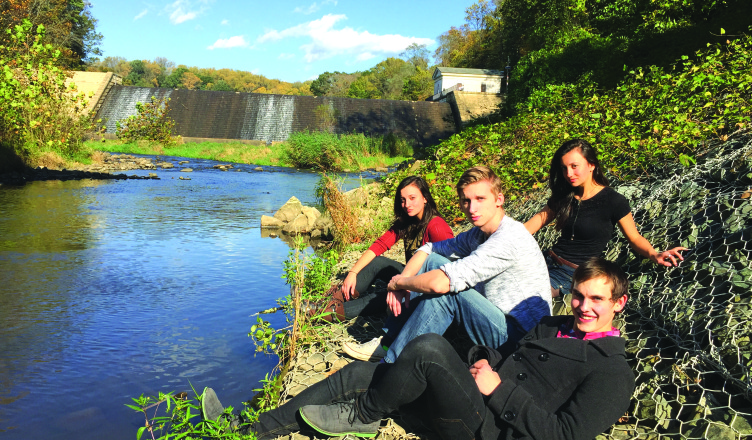 The Patchwork Fools, an indie-pop band of Towson alums and one current student, got their start two years ago rehearsing in Towson Run. Today, the group is working on a new album — to be released in May — and planning a summer tour of the northeastern U.S., when they’ll display a literal patchwork quilt on stage during their performances.

The quilt is made up of patches from fans and students who write something unique about themselves or create an image depicting their personal creative endeavors. The quilt will also be displayed digitally through the band’s website.

Will Mason, the band’s vocalist and guitarist, graduated with a degree in economics last May. He said that the group believes everyone has a creative side.

While the physical quilt has made frequent appearances at the band’s shows, a digital quilt will launch on thepatchworkfools.com next month, on Feb. 21. Anyone interested will be able to submit their own patch and see the creative expressions that have been submitted in the past.

“I think my favorite one so far is there’s a guy who’s a scientist. He did astrophysics as his major at Penn State, I think, and he did this visual representation of this project he’s working on where he uses non-integer dimensions,” Mason said. “We think of one, two and three as being the dimensions that we exist in, but he thinks about it where it can be in between those to represent changes in time. So it’s a whole weird thing that I don’t understand at all of course, but a visual representation of that project. Just really weird and unique stuff.”

The patches can be about anything. When The Patchwork Fools brought their project to Towson, statements of uniqueness and expression ranged from a capella and fraternity membership to pictures of pet rabbits and trees, and to reminiscing on experiences in nature.

“It’s really a way for people to express themselves creatively, and reigning in that idea that what’s unique and creative about us should bring us together, not separate us,” Mason said.

The band plans to incorporate the digital quilt into the album art of the leaflet inside their CD.

Their upcoming album, “Denser Suns,” will be released in May, and while Mason calls their genre indie-pop, he says the songs on the album range from folky ballads to electronic pop songs.

“As a musician, I’ve never wanted to tie myself down to one particular genre,” he said. “As a musician, you’re strongly encouraged to do that. People are like, ‘You have to get your niche. You have to tie yourself down,’ but I think there’s ways to be tasteful about fluctuating in the sound throughout the experience that you’re giving to people.”

The Patchwork Fools sound is as unique as the patches on their quilts. Junior computer science major Josh Funk plays drums while alums Aviva and Leora Match provide vocals. Aviva also plays the glockenspiel and mandolin, while Leora plays the piano.

In July, after “Denser Suns” and the digital quilt have both been released, The Patchwork Fools will go on tour, starting in Boston and looping down to Ocean City, Maryland.

“So far the reception is, it’s very unique, in a good way,” Mason said. “Then again, you never know until a lot of people hear it. But so far that’s been the reception.”